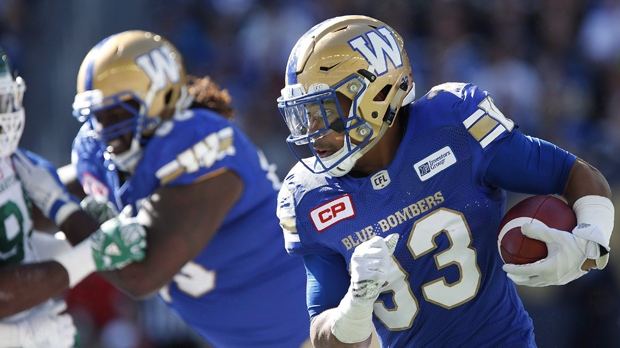 WINNIPEG -- The Winnipeg Blue Bombers have locked up running back Andrew Harris on a one-year contract extension.

He said the decision to resign was an easy one after seamless contract talks with the Bombers.

“At the end of the day, there’s still a love to play this game and it doesn’t really come down to the dollars and cents. It’s about being in the locker room with the guys and trying to put your best foot,” said Harris.

“Every day, guy after guy was getting signed. It just goes to show the brotherhood we have in the locker room, the passion the guys have for this organization and for this city.”

When asked about the one-year duration of the extension, Harris said he would have happily signed a five-year contract, but is happy to take things one year at a time.

“After you kind of hit your 30s, you’re always one hit from this being over. So you have to take it play by play, year by year, so for me, it’s nothing different there.”

Harris joined the Blue Bombers as a free agent in 2016 and helped Winnipeg win the 2019 Grey Cup as the game’s MVP.

He is a five-time CFL All-Star and was named the CFL’s Most Outstanding Canadian in 2017. That year, he also broke the league record for receptions by a running back with 105.

Before playing professionally, Harris began his football career here in Winnipeg playing with the Eastman Riders, the Grant Park Pirates, and the Oak Park Raiders in high school.