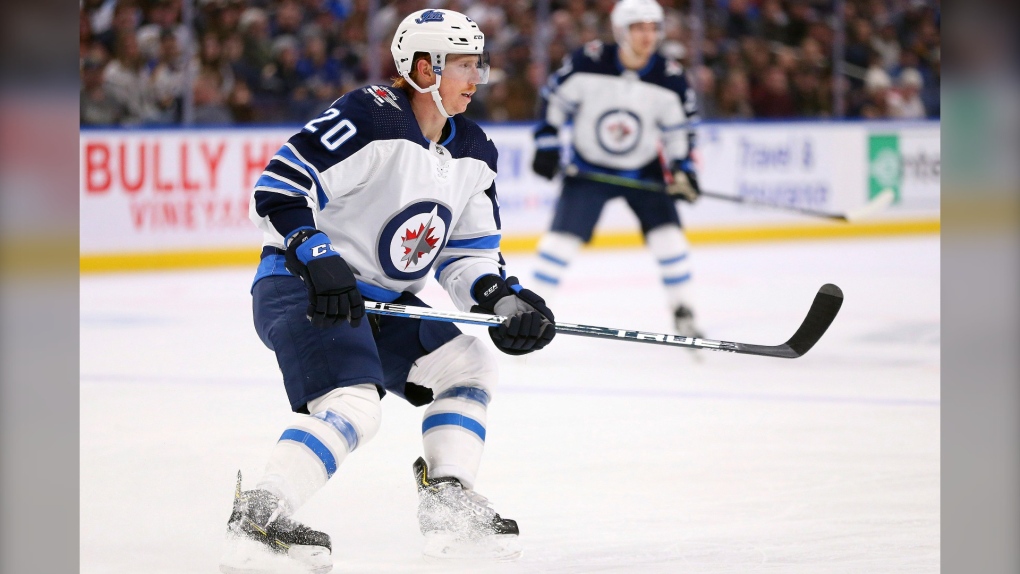 BUFFALO, N.Y. -- Kyle Okposo hopes he and the Buffalo Sabres provided general manager Jason Botterill a reason to rethink his approach a day before the NHL's trade deadline.

For a team that looked like it was in need of major roster overhaul as recently as two weeks ago, the Sabres have suddenly begun showing signs of an identity. After a 2-1 win over the Winnipeg Jets on Sunday, they're back in the fringe of the playoff race.

"I think we made Jason's job a little bit more difficult, which is what our goal was," said Okposo, who scored twice, including the go-ahead goal 7:47 into the third period. "We like the group that we have in here. I think we've shown some resilience that's been missing in the past."

Counted out as recently as Tuesday after a 7-4 meltdown against the last-place Ottawa Senators, the Sabres have bounced back with a pair of impressive victories against opponents in the thick of the playoff race. The win over the Jets came a day after Jack Eichel scored twice in a 5-2 win over the Pittsburgh Penguins.

By improving to 7-3-1 in its past 11 games, Buffalo moved into a tie for fifth with Montreal in the Atlantic Division standings with 66 points each, and six back of third-place Toronto.

This is the type of structure and focus first-year coach Ralph Krueger was hoping he'd instil into a team that was criticized for being soft and fragile during previous late-season collapses.

"We all spoke about wanting to have meaningful games. Well, if anybody thought these two games weren't meaningful, they don't get what's going on here," Krueger said. "And that's what the goal of the season really is, to have as many of these as possible."

The outcome was another troubling sign for the Jets, who spent last week attempting to bolster an injury-depleted lineup by acquiring defenceman Dylan DeMelo (from Ottawa) and centre Cody Eakin (from Vegas). In losing on consecutive days, following a 4-2 loss at Philadelphia, Winnipeg stood to lose ground in a tightly contested race for the Western Conference's final two playoff spots.

The Jets began the day at eighth in the conference with 69 points, a point ahead of Nashville and Calgary, which was playing at Detroit later Sunday.

"We just got to get over it," said captain Blake Wheeler, who scored the lone goal. "It's not going to be smooth sailing. There's going to be adversity. We've got a young hockey team that's learning how to deal with that, and we've just got to fight through it."

Connor Hellebuyck finished with 23 saves to drop to 5-4-1 in his past 10 games, and the Jets continued a troubling trend of being inconsistent on offence. Winnipeg has scored four or more in six of its past seven wins and managed two or fewer goals in each of its past five losses.

Okposo enjoyed his first two-goal game in 23 months, and provided the Sabres some much-needed secondary scoring. Eichel was held without a point for the first time in eight games and fifth time in his past 42.

Both of Okposo's goals were the result of fortunate bounces. The game-winner came after Buffalo defenceman Brandon Montour's pass from his own blue line struck teammate Zemgus Girgensons' skate and then caromed off the skate of Winnipeg's Nathan Beaulieu at the Jets blue line.

The puck dribbled to Okposo, who broke in up the right side and lifted a shot over Hellebuyck's shoulder protecting the near post.

After the teams traded goals in the first period, Johansson did his part in preserving the win by keeping the game tied at 1 in the second.

Five minutes in, he kicked out his right pad to stop Jansen Harkins set up alone in the slot. Some three minutes later, Johansson got his glove arm out just in time to stop Nikolaj Ehlers' one-timer from the slot.

"I had a bunch of chances and it (stinks) when they don't go your way," said Harkins, who set up Wheeler's goal. "Those games are going to happen when they just don't go for you. Hopefully, the game will come when they just go in."

NOTES: The Winnipeg-born Eakin made his Jets debut two days after ninth-year player was acquired in a trade with Vegas. Jets defenceman Josh Morrissey was a last-minute scratch with the team announcing the assistant captain has an upper-body injury.

The Jets are at Washington on Tuesday night.