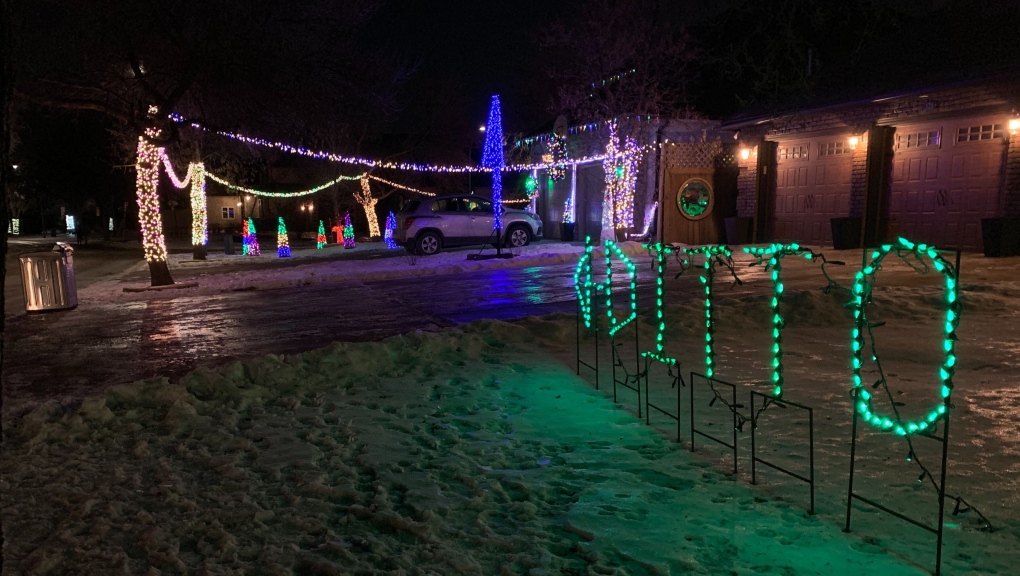 Paula Paterson's neighbour goes all out when it comes to decorating his house for the holidays, her house takes a more subtle approach. (Source: Jamie Dowsett/ CTV News Winnipeg)

WINNIPEG -- A homeowner in Linden Woods has playfully managed to steal the spotlight from a Christmas-light loving neighbour.

Paula Paterson's neighbour goes all out when it comes to holiday decorating. The house along Shorecrest Drive is an impressive Christmas spectacle for those driving-by.

"Our neighbour here has such an elaborate display, that we found people would just sort of drive by our house and not even look," Paterson told CTV News.

Rather than trying to compete with the Christmas spectacular, a task Paterson said is nearly impossible, she went for a more subtle approach.

Paterson said her husband jokingly told their neighbour they wanted to put up a sign that said simply 'ditto' with an arrow pointing to the impressive display.

The sign has become an icon of Winnipeg's Christmas lights tour, garnering similar attention to the iconic Humbug sign.

READ MORE: Humbug: A sign of Christmas in Winnipeg

Paterson said people will stop and take pictures of the minimalistic holiday display that takes all of five minutes to put up. While there may be a lack of lights at her house, she said there is no shortage of Christmas cheer.

"We love it, and it's just a shout out to my next-door neighbour here who does such a good job on his lights, and we get all this attention mostly because of him," she said.

"Everybody loves it—they get such a kick out of it."