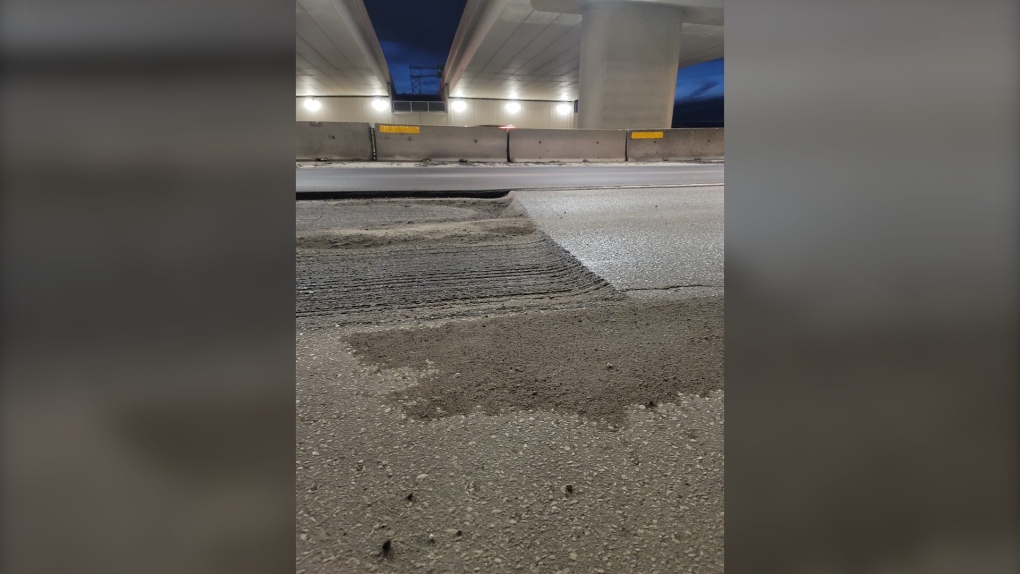 Benjamin Kolteski is warning drivers about construction along the Perimeter Highway that damaged his tires on his car. (Source: Benjamin Kolteski/Facebook Oct. 14, 2021)
WINNIPEG -

A Winnipeg man is warning drivers about a stretch of construction that could leave vehicles damaged if they aren't careful.

Benjamin Kolteski said he was driving in the northbound lanes on the west Perimeter Highway Tuesday evening when he came across a stretch of construction at the Roblin overpass.

The province said the work going on in the area includes milling the pavement and filling it with two inches of new pavement.

He said he wanted to get out of the lane because he knows it can be bumpy when getting back onto the normal pavement, but unfortunately he couldn't.

"So I continued on, I saw that it was still uneven road … at this point, the speed limit dropped to 80 kilometres per hour," he said, "Then all of a sudden I see, probably one second or less reaction time, a five inch, I would say, cut in the concrete in where the construction essentially ended and the normal road continued. No ramp or sand divot or anything to kind of lift the vehicle's front end up over the divot, but just a straight vertical wall."

He noted there wasn't a second sign at the end of the construction that said there was any bump in the road.

He said he hit that divot and immediately pulled over out of concern. He got out of his car and said he could hear both of his front tires leaking air.

Kolteski was able to get his car to a nearby dealership to get it looked at but added he was so surprised that a construction zone would be left in that condition.

While he was pulled over, Kolteski said he saw others pull over as well to check their vehicles for any potential damage.

Since the incident, Kolteski said he has filed a claim with MPI and has been told by his dealership that one tire is fixed, while the other is destroyed.

He is hoping that by telling others, they will be able to avoid the dangers of that stretch of road and it will be fixed soon.

"It's just mind-boggling that in terms of safety conditions that this is allowable and this okay when it really, really shouldn't be."

The province said it is working to ensure all areas are safe for drivers.

"Manitoba Infrastructure is working with the contractor to ensure smooth transitions by placing asphalt ramps at these locations," the government said.

"As this is a construction zone, motorists are advised to drive with caution, adhere to posted speed limits and follow signs erected by the contractor. Manitoba Infrastructure continues to monitor on-site to ensure transitions are performing well and that proper signage is in place."