Winnipeg firefighters were kept busy early Wednesday, battling a series of suspicious blazes within about a two-hour span in the city’s West End.

According to a City of Winnipeg release, just before 3 a.m. the Winnipeg Fire Paramedic Service was called to the alley in the 500 block of Furby Street where they put out a garbage fire.

A few minutes later, they went to 550 Furby Street where they found a two-car garage fully engulfed in flames. 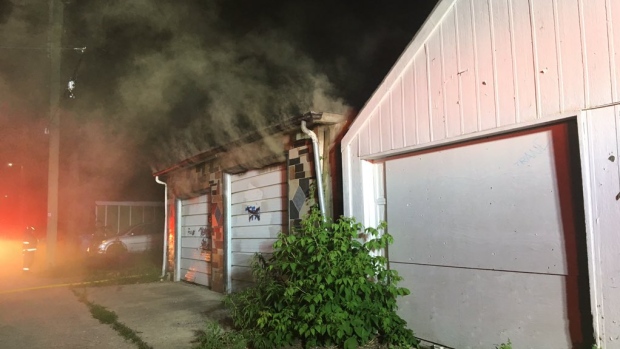 The fire was declared under control just before 4 a.m.

At 3:10 a.m., the fire service received a report of a fire in a three storey apartment building in the 400 block of Furby Street, the same building where a fire occurred earlier this month.

Crews evacuated the building and got the fire under control by 3:30 a.m.

Tenants were able to return to their suites after the fire was extinguished.

At 4:18 a.m., crews responded to another garbage fire in the 500 block of McGee Street, just three blocks away.

Minutes later, at 4:24 a.m., a fire was reported on the exterior of a home in the 600 block of Agnes Street, in the block over. That fire was quickly extinguished, but crews then discovered two separate garbage fire in the same block.

The fire service said no injuries were reported.

All of the fires are under investigation and are considered suspicious.

Officials ask anyone with information to call Winnipeg Police Service.

“All of these were what we would call opportunistic arson,’” said Winnipeg Fire Paramedic Service Cheif John Lane. “There were things there, garbage, mattresses, that sort of thing, that are easily ignited by people passing by.”

Lane said it’s fortunate firefighters were able to bring most of the overnight fires under control before the fires spread.

“If those fires do develop for any period of time, they of course become larger and threaten more structures, threaten lives and threaten property,” Lane said, noting that one garage was damaged in the rash of fires.

Lane said garbage, recycling and yard waste should be put out in carts on collection day rather than allowed to accumulate on properties.

He also said homeowners can schedule pickups for bulky waste items, like mattresses or furniture, by calling 311.

“Keep anything flammable, like garbage, firewood, any other bulky waste while it’s awaiting pickup, keep it well away from the house and garage,” he said, encouraging people to also install motion activated lights on their properties.

He also asked people to call police if they see anyone entering a vacant structure.

The garage on Furby Street that was damaged in a fire Wednesday morning is on a property with a home that was recently boarded up, following a police raid.