Rewind 100 years ago, and Winnipeg's streets were filled with protesters demanding fair wages and better working conditions during the Winnipeg General Strike. The uprising eventually ended in a violent police crackdown, but not before changing the city forever.

To honour the strike on its centennial, Chris Young, who teaches at Kelvin High School, encouraged his grade ten students to explore the legacy of the strike from multiple perspectives via a special project.

The project earned Young the Governor General's History Award for Excellence in Teaching.

"It's an amazing honour. I'm completely humbled by it," said Young. "It's quite surreal. I'm still just trying to process it."

Students were encouraged to investigate ideas associated with the strike that still resonate today, like fighting for a living wage and the role of fake news.

"There are so many themes that in 1919 that are actually very contemporary ideas, so my students could really connect with some of those ideas," Young said.

"The project allowed them to get out into the community and explore their city, and I think they just really connected with the history because they were given these authentic experiences." 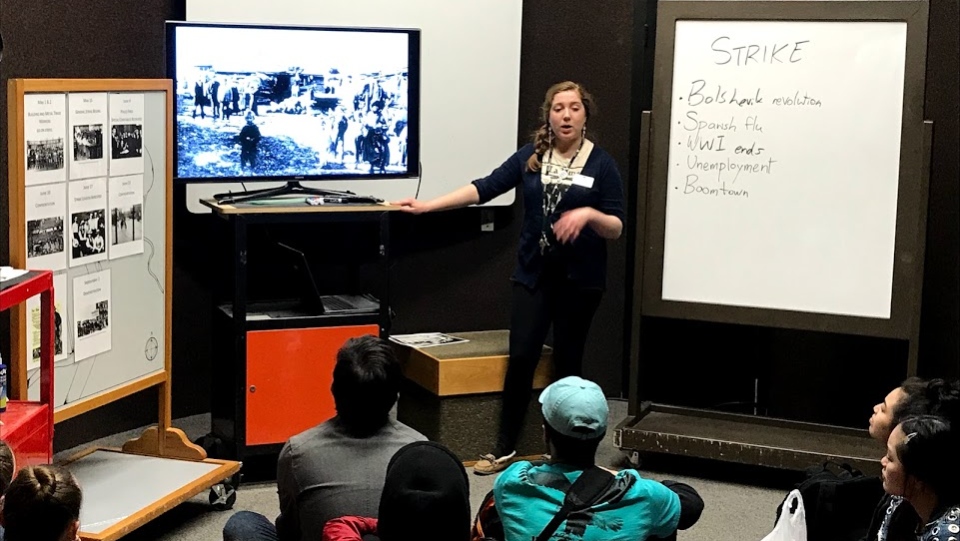 On May 15, 2019, the one-hundredth anniversary of the first day of the strike, the students came together to host a special commemorative day at their school. The students organized a gallery walk of their research projects and invited guest speakers, historians, and politicians to attend and speak on the strike's impact.

"In the moment, it really didn't feel like work at all, and for any teacher kind of thinking of a similar project, I would highly recommend it."

Young got the idea for the project after making similar assignments about the high school's centennial and the hundredth anniversary of the Battle of Vimy Ridge.

Young is one of six recipients of the Excellence in Teaching Award. Each recipient will receive a $2,500 prize, with their schools also receiving a $1,000 prize.

"With this award, we celebrate the extraordinary work of teachers who outdo themselves every day to shape our adults of tomorrow," said Janet Walker, president and CEO of Canada's History Society, in a news release.

Young and the five other Governor General's History Award recipients will also be presenting at 'Canada's History Forum,' taking place virtually on November 27.