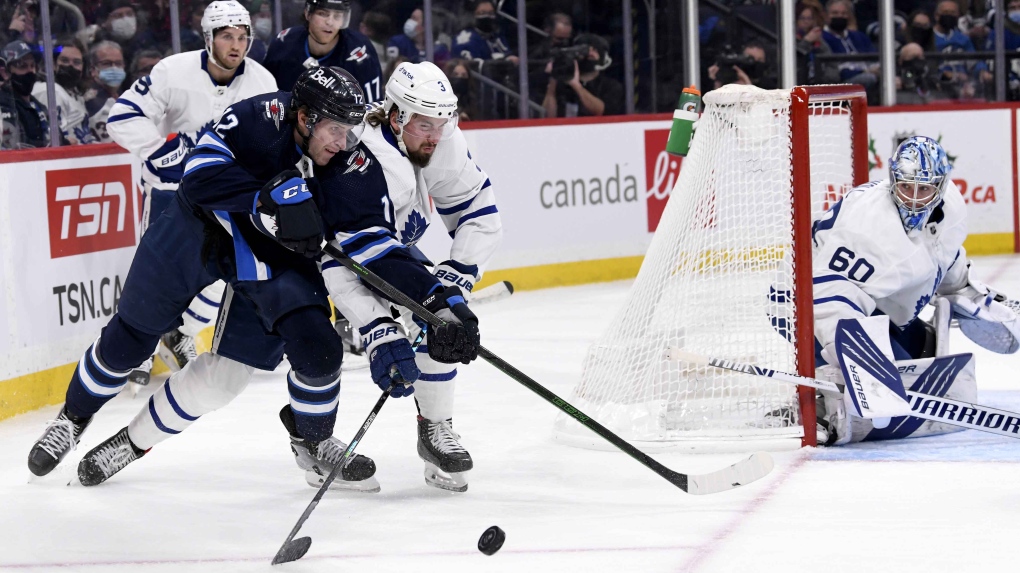 It's nearly 2022 but you'd never know it from the Winnipeg Jets' 6-3 victory over the Toronto Maple Leafs Sunday night at Canada Life Centre.

The Jets celebrated the 1,000th NHL game of their captain Blake Wheeler with a hometown offensive display that would have made Dale Hawerchuk and the rest of the 1980s Jets proud.

There were also enough penalties and punches thrown between the two sides to evoke memories of the Broad Street Bullies of the 1970s.

Connor Hellebuyck stopped 32 shots in the Jets net for his ninth victory of the season while Joseph Woll got in front of 35 at the other end of the ice.

Wheeler helped get the Jets on the board first with a nifty pass on the power play to Dubois, who was all alone in front of the Leafs net. His deke beat Woll, the Leafs' backup, at 4:05 to give the home side a 1-0 lead. It was his 12th goal of the season.

Hellebuyck bailed his captain out just a few minutes later as Wheeler got burned dangling at centre ice while the Jets were changing, enabling John Tavares to skate in all alone. Hellebuyck stuck out his left pad as the Leafs captain went to his backhand on a deke.

Dubois then took the dreaded offensive zone penalty as he tripped up centre David Kampf, sending the Leafs to the power play. Toronto didn't do much for most of the man advantage but out of nowhere left winger Pierre Engvall found Bunting in the Jets' slot and his wrist shot bulged the twine behind Hellebuyck at 16:08.

The Jets regained the lead before the second period was two minutes old when defenceman Neil Pionk hit Copp with a stretch pass and he beat Woll on a partial breakaway.

The Jets doubled their lead to 3-1 just a few shifts later as Dominic Toninato found Svechnikov on a two-on-one and his wrist shot beat Woll high to the blocker. It was the Russian winger's second goal of the season.

The Jets went back to the power play a few minutes later. Connor put the Jets ahead 4-1 when his shot from the right face-off dot beat Woll at 7:38 for his 15th of the season.

Wheeler, who has yet to score a goal all year but had two assists on this night, was sent in all alone at the mid-way part of the second period but he couldn't beat Woll. Just a few seconds later, however, Ehlers converted Copp's pass for his ninth of the season to give the Jets a 5-1 lead. It was Winnipeg's fourth goal in less than nine minutes.

Wheeler's tripping penalty on Rasmus Sandin at 13:28 of the second period put the Jets down two men and Matthews made him pay. His wrist shot from the top of the circle beat Hellebuyck just underneath the crossbar just 52 seconds later to make it 5-2.

The Leafs still had the power play but couldn't capitalize but it didn't matter as seconds after it expired, they pulled within two. Kase went down the right side and squeezed a shot between Hellebuyck and his left post at 15:46 for his sixth of the season.

The Jets salted the game away thanks to yet another power-play goal as Connor hit Scheifele at the Leafs blue line and he split the defence and went five-hole on Woll for his sixth of the year at 8:14 of the third period.

The Leafs were playing the second road game in as many nights, having lost to the Minnesota Wild 4-3 in a shootout Saturday. Toronto played their second game without sniper Mitch Marner, who collided with teammate Jake Muzzin at practice on Friday.

The Jets honoured Wheeler in a pre-game ceremony with a silver stick and a video montage of his career, which started with the Boston Bruins in 2008 and took him to Atlanta before moving with the Thrashers to Winnipeg in 2011. The Jets all wore Wheeler jerseys during the warm-up.

This report by The Canadian Press was first published Dec. 5, 2021.