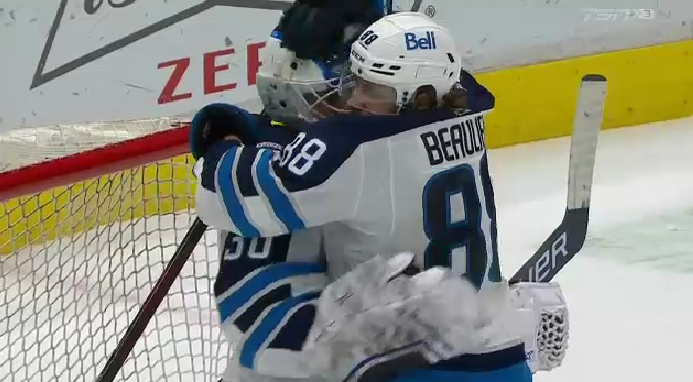 VANCOUVER -- For Winnipeg Jets goalie Laurent Brossoit, playing in Vancouver's special, even with no fans in the stands, he earned his second career shutout in the city on Friday night as the Jets blanked the Canucks 2-0.

"They all feel good, especially when it's in your hometown being that much better," said Brossoit. "It's just another good game to add to a good start to our season."

He had 29 saves for Winnipeg (10-6-1) on Friday, but Vancouver has long been a place where the 27-year-old netminder has had success.

His first shutout also came in the city back on Dec. 22, 2018 when Winnipeg took a 1-0 victory. In three career starts against the Canucks, Brossoit has a .981 save percentage.

"I would say if there's a city that I want to have those stats, it's probably this one, so I'll take it," he said.

"He made a couple of really good saves where he had to get across hard but by the time he got there he was really in his own structure. He was composed with it, and then the rebound control. There wasn't anything that might have got away from him."

Mark Scheifele opened the scoring midway through the first period, capitalizing on a misstep by the Vancouver defence.

The puck bounced through the feet of Alex Edler at the Canucks blue line and Scheifele chased it down for a breakaway, putting a backhanded shot past Vancouver's Thatcher Demko.

"I obviously saw (Demko) was far out of the net but he's a he's a pretty stellar goaltender, a big body, so just kind of made my move and he bit a little bit so I was happy to put it in," Scheifele said. "I don't get many breakaways so it's fun when you put them in."

The goal extended the centreman's point streak to nine games. He has six goals and seven assists since Feb. 1, when he tallied a goal and an assist in the Jets' 4-3 shootout loss to the Flames.

Demko held his team in Friday's game with a series of clutch saves.

One of his best on the night came late in the first frame when the Vancouver netminder snatched a speeding puck out of mid air to rob Kyle Connor of a power-play goal.

"I thought you knew right from the puck drop that it was the type of game where if there was going to be a mistake, it would have a big impact on the end result of the game," said Demko, who stopped 29-of-30 shots for the Canucks (8-12-1).

"So kind of a playoff style game, but I thought our guys rose to the challenge and put a good effort in."

The Canucks pulled the goalie with 2:33 left on the game clock, but Vancouver couldn't get a puck past Brossoit to force overtime.

Instead, Mason Appleton forced a giveaway at the Canucks blue line and drove the puck into the empty net to seal the game.

Brossoit was tested at times on Friday.

Midway through the second period, Vancouver defenceman Nate Schmidt went 1-on-1 with the goalie on a breakaway. Brossoit stopped the initial blast, but couldn't control the rebound. The puck bounced backwards into the crease, with the goalie falling on it just in time to stop it from crossing the goal line.

The Canucks also had chances on a pair of power plays but couldn't finish.

"I'm just getting tired of saying we played a good game but we didn't score. It was another one of those tonight," said Elias Pettersson.

It's been a bit of a frustrating year for the star centre, who has 14 points (five goals, nine assists) in 21 games.

Pettersson said he and his linemates had opportunities on Friday but may have made things more complicated than they needed to be.

"I'm trying to make the perfect pass when maybe I can shoot the easy shot and create a scramble and maybe, hopefully, score a goal," he said. "I don't know. Maybe now when the puck isn't going in, just got to simplify."

Vancouver had the puck a lot in Friday's game but didn't create enough traffic in front of Brossoit, said coach Travis Green.

"But there's also another team that has a say in what's going on on the ice. And sometimes you miss the net because they're in the shot lane and they're willing to block a shot," he said.

"Any time there's a 2-0 game with an empty-net goal, it's a hard-fought game. And you can sit and pick apart why you didn't score all daylong, but at the end of the day, we didn't get a goal."

The teams will battle again in Vancouver on Sunday.

This report by The Canadian Press was first published Feb. 19, 2021.