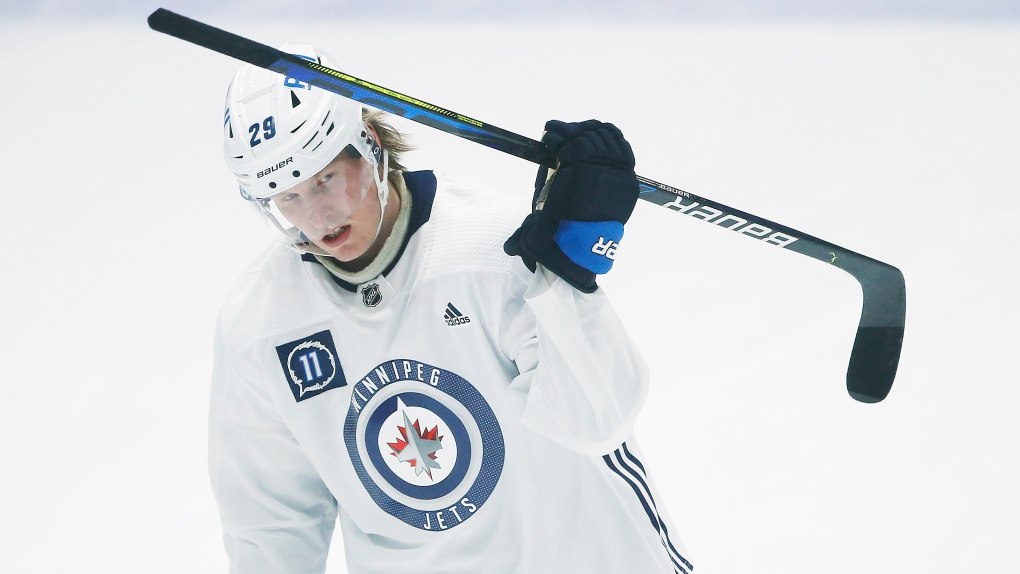 WINNIPEG -- The Winnipeg Jets have traded sniper Patrik Laine and Jack Roslovic to the Columbus Blue Jackets in exchange for 22-year-old Pierre-Luc Dubois and a third round pick in the 2022 NHL draft.

The Jets will also retain 26 per cent of Laine’s reported $7.5-million salary.

In an Instagram post Laine said, ”I couldn't have asked for a more loyal, dedicated and passionate fanbase. Thank you to all the Jets fans who took me in and made my family and I feel welcome.”

“It’s disappointing to having this conversation but it’s the nature of pro sports and for our organization we move forward,” said Jets captain Blake Wheeler Saturday.

Dubois was the third overall pick in 2016 and led the Blue Jackets in points and assists last year with 49 and 31 respectively. He added another four goals and six assists in the playoffs. Since joining the league in the 2017-18 season he has played in 239 regular season games collecting 159 points.

“To get a top centre in this environment is virtually unheard off so that’s why the bidding was fast and furious,” said Winnipeg Jets general manager Kevin Cheveldayoff.

“Getting a player coming into his prime, down the middle, we wouldn’t have moved a Patrik Laine for anyone that didn’t fit that certain criteria of a top centerman or a top defenceman and when that opportunity presented itself I felt it was necessary that we make that move.”

Dubois does have a Manitoba connection. He is the son of Manitoba Moose assistant coach Eric Dubois. He also played minor hockey in the Quebec Major Junior Hockey League, as did Jets forward Nikolaj Ehlers.

“Everyone knows he’s a great player. He’s a big guy and he can skate, make plays and he’s a very smart player so it’s going to be fun to have him on the team,” said Ehlers.

Cheveldayoff said the trade has been in the works since training camp but picked up steam in the last couple of days.

“Trading a player like Patrik, and he’s a great person, has special abilities, you know it’s tough. But Pierre-Luc Dubois is a big hard two-way centerman that you know that makes other people around him better, and that’s an important factor if you’re trying to win and that’s what we’re trying to do here,” he said.

“For us it’s about looking forward here, the group that we’re assembling here is something that we’re excited about.”

With files from the Canadian Press.