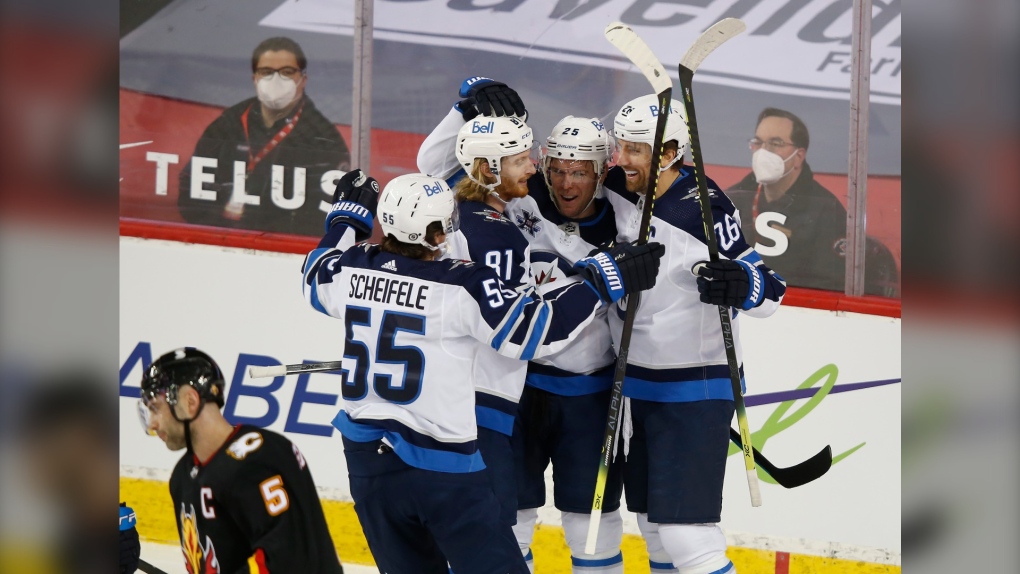 CALGARY -- Paul Stastny scored the eventual game-winner for the Winnipeg Jets in a 3-2 victory Friday over the host Calgary Flames.

Stastny, Blake Wheeler and Kyle Connor each had a goal and an assist for Winnipeg (21-11-2). Jets starter Connor Hellebuyck made 25 saves for the win in his league-leading 27th start of the season.

Milan Lucic and Matthew Tkachuk scored in a fourth straight loss for the Flames (15-17-3). Calgary's Jacob Markstrom stopped 26-of-29 shots in the loss.

The Flames have mustered four goals in their last four games. Calgary is 4-5-0 since Darryl Sutter took over as head coach March 8.

Calgary is at home to Winnipeg on Saturday and Monday for three games in four days between the North Division rivals. Winnipeg leads the season series 4-1-1.

With Markstrom pulled for an extra attacker, Tkachuk tipped in an Elias Lindholm shot to draw the hosts within a goal with 1:59 remaining in regulation.

Markstrom remained out of his net and with Statsny serving a tripping penalty on Tkachuk, the Flames couldn't produce the equalizer 6-on-4 over the final seconds.

While Calgary attempted to kill off a double minor to Lucic midway through third period, Markstrom's clearing attempt over the glass gave the Jets a two-man advantage.

Stastny scored Winnipeg's second power-play goal of the game from the slot on a feed from Wheeler at 14:54. The Jets have scored two power-play goals in a game four times in their past eight.

Mikael Backlund's sharp-angled shot deflected off both Lucic and Jets defenceman Josh Morrissey for Calgary's first goal at 6:52 of the third.

Flames defenceman Noah Hanifin put a shot off the crossbar with 4:51 left in the second period, and the visitors led 2-0 heading into the third.

A streaking Connor lifted his own rebound over the right pad of Markstrom at 5:33 of the second for his team-leading 17th goal of the season.

Stastny's redirect of Connor's shot deflected off Wheeler's skate and by Markstrom for a power-play goal at 9:13 of the first.

This report by The Canadian Press was first published March 26, 2021.