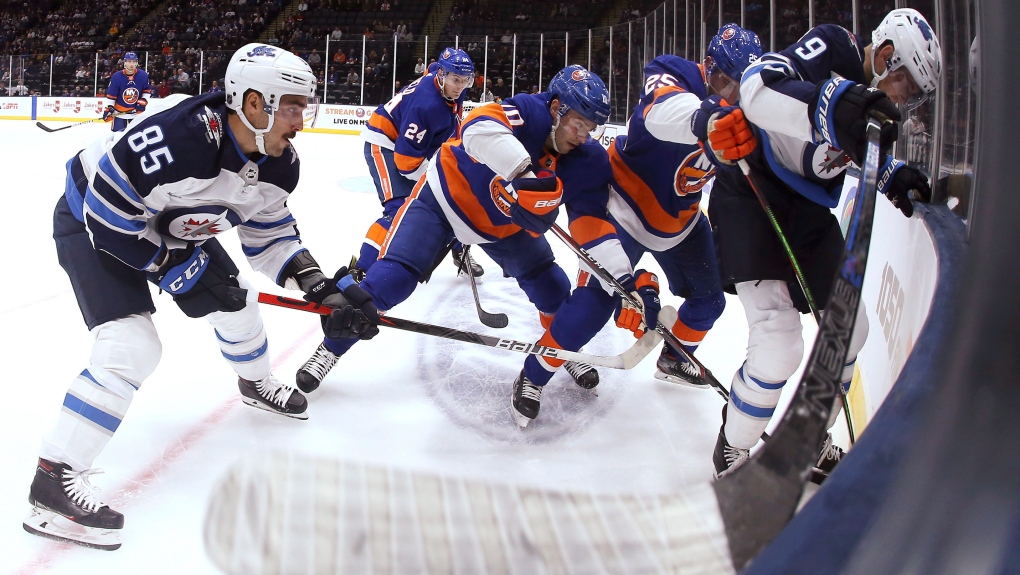 It was the first win of the season for the Islanders, who lost their home opener 2-1 to Washington on Friday.

The Jets lost for the second time in three games in the New York area to start their season. Winnipeg lost 6-4 to the Rangers in their season opener Thursday, and beat the New Jersey Devils 5-4 in a shootout Friday. The Jets are opening the season on a four-game trip that wraps up Tuesday in Pittsburgh.

After a scoreless first period, Bailey put on the Islanders on the board, tipping in a power-play goal at 1:51 of the second. Anthony Beauvillier and Devon Toews picked up assists.

It was the third straight game the Jets had allowed the opening goal.

Nelson made it 2-0 at 4:38, sending a shot past goaltender Laurent Brossoit, who started his second straight game and finished with 29 saves. Bailey and defenceman Ryan Pulock assisted on the goal.

Lee stretched the Islanders' lead to 3-0 at 15:55 with his first goal of the season, assisted by Scott Mayfield and Jordan Eberle.

Patrik Laine put the Jets on the board at 17:06 of the second, snapping a shot past Thomas Greiss for his first goal of the season. The Islanders were one of two teams the 21-year-old Laine hadn't scored against. Columbus remains the other.

Beauvillier scored for the Islanders at 1:25 of the third, with assists going to Leo Komarov and Derrick Brassard, his first point as a member of the Islanders.

The Jets outshot the Islanders 15-9 in the opening period. The Islanders dominated the second period with a 19-9 advantage in shots.

Brossoit played well despite the loss. His best early save came when he stopped of Komarov on a short-handed breakaway at 13:10 of the first. Brossoit also made two short-handed saves on Nelson in the same sequence midway through the second.

The Islanders started Greiss in goal after newcomer Semyon Varlamov played in the opening loss to Washington on Friday.

Greiss shared the William M. Jennings Trophy with teammate Robin Lehner last season when the Islanders allowed the fewest goals in the league.

Up next, the Islanders host the Edmonton Oilers on Tuesday night, meanwhile the Jets visit the Pittsburgh Penguins that night.