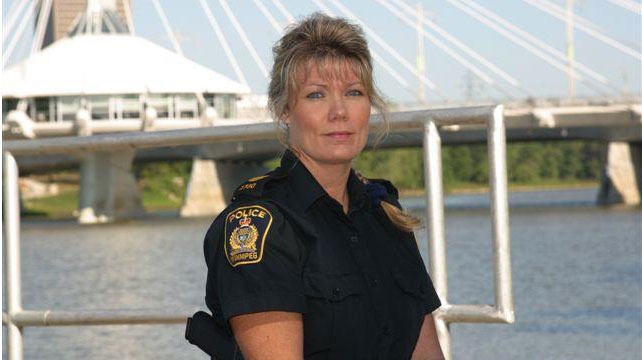 In an farewell statement Friday, Manitoba MP Shelly Glover said she took a break from policing to become a legislator ten years ago, and will now return to her work as a police officer. (handout)

Winnipeg Conservative MP Shelly Glover announced she will not seek re-election to the House of Commons in the upcoming federal election.

In an email statement Friday, Glover said she took a break from policing to become a legislator ten years ago, and will return to her work as a police officer.

The MP was first elected to the House of Commons in 2008 and re-elected in 2011. During her time in Ottawa, she was involved in passing more than thirty crime and justice bills.

“While I am proud of this record and the time I spent in Ottawa, it is time to return to my previous life,” said Glover. “This past 18 months has been particularly difficult for me and my family as we have dealt with some very serious health issues while I was away from home.”

At a prostate cancer event in Winnipeg Thursday, Glover confirmed she had been treated for skin cancer last year.

“We thank Ministers Paradis and Glover for their years of service to their communities and their country. We fully understand their desire to spend more time with their families and wish them well. The Ministers will continue to serve in their current Cabinet roles,” Prime Minister Stephen Harper said in a statement.

Glover will continue in her role as Minister of Canadian Heritage and Official Languages, which includes planning Canada’s 150th birthday celebration, until the next general election.

Glover is also the Regional Minister for Manitoba and MP for St. Boniface.

The only contestant in the running for the St. Boniface seat is former Winnipeg city councillor Dan Vandal for the Liberal party.

Today, in the company of my family, I am announcing that I will not be seeking re-election to the House of Commons in the upcoming election.

This day has come, like I said it always would. Ten years ago, I made the decision to become involved in politics in order to: better protect our streets and communities; to give victims a stronger voice; and to ensure that offenders are held to account. As a police officer, I had seen firsthand the need to improve the laws in order to give law enforcement officers the tools they need to help others and to improve safety and security across the country.

I took a break from policing to become a legislator and am proud to have been part of a government that passed over thirty crime and justice bills. I will be returning to my work as a police officer, knowing that the tools we need have been enhanced, such as:

- creating new offences for luring a child, cyber bullying and prostitution
- strengthening the sex offender registry and the DNA databank
- ending 2 for 1 credit in sentencing and bringing truth in sentencing
- ending sentence discounts for multiple murders
- ending house arrest especially for sexual assault
- eliminating the faint hope clause for murderers
- scrapping the wasteful and ineffective long gun registry
- ensuring tougher penalties for serious offences like sex crimes against our children
- giving victims a voice in the Criminal Justice system with the Victims Bill of Rights.

I promised these things, I have delivered and I am extremely proud of these accomplishments. While I am proud of this record and the time I spent in Ottawa, it is time to return to my previous life. This past 18 months has been particularly difficult for me and my family as we have dealt with some very serious health issues while I was away from home. As their wife, mother and grandmother (with a second grandchild on the way), my family is very grateful that I am coming home.

It has been a tremendous honour to serve as the Member of Parliament for the residents of Saint Boniface and I am lucky to have served under the leadership of Prime Minister Stephen Harper. I cannot thank him enough for the opportunities he provided me. This truly has been a humbling experience.

I would never have had this experience were it not for the countless supporters who gave so much to help me in this quest. My electoral district association and campaign team in particular have been my extended family throughout. I’d like to extend my deepest gratitude to them all and I can say with confidence that we are all in good hands with Prime Minister Harper and the next Conservative MP for Saint Boniface.

As I conclude, I am reminded that we live in the greatest country in the world where a young pregnant teenager from a broken home can strive to help others and become a woman sitting at the Cabinet table making decisions that impact all of our lives. I am thankful every day for the faith and trust placed in me by the voters of my riding and I will never forget this amazing experience.

I will be continuing my work as the MP for Saint Boniface, the Minister of Canadian Heritage and Official Languages, and the Regional Minister for Manitoba until the next general election. I am pleased to continue my work in planning Canada’s 150th Birthday as well as serving my constituents and other matters related to my portfolio.

Thank you and God Bless Canada!