'Winnipeg needed to get in on it': Pair of hotels joining in on the sign wars trend 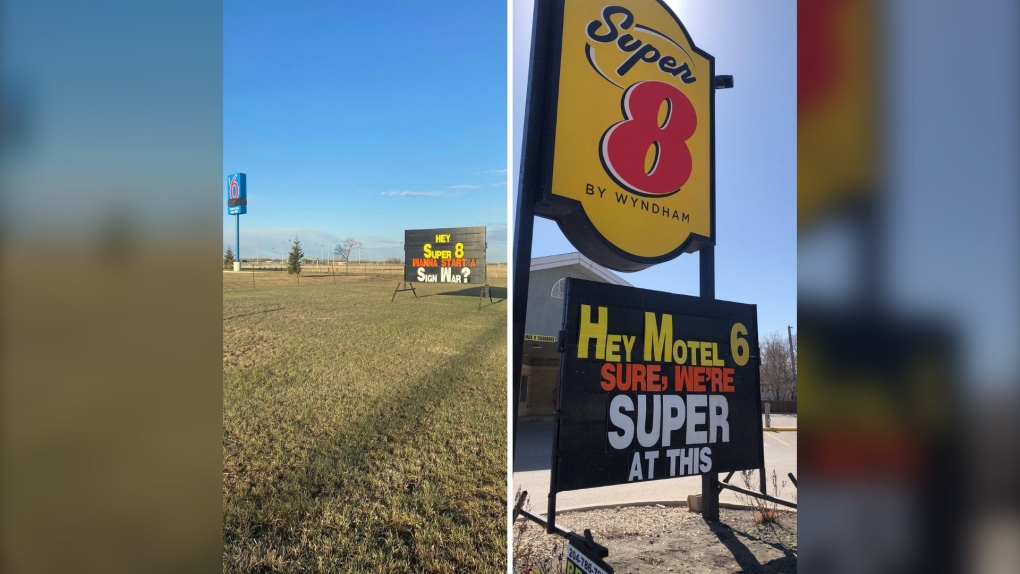 A sign war is starting up between Motel 6 and Super 8 in Winnipeg. (Source: Super 8 Winnipeg West/Facebook)

WINNIPEG -- A recent internet trend has made its way to Winnipeg thanks to a pair of hotels.

Sign wars are a friendly battle between businesses of putting up witty comebacks towards each other and now that has started in Winnipeg thanks to Motel 6 Headingley and Super 8 in Winnipeg West.

Karina Bueckert, the director of business development for Motel 6 and Super 8, said she felt like it was time that Winnipeg got in on the sign fun.

"We decided that Winnipeg needed to get in on it as well. So we were happy to get it started and we are very excited to see who is going to come on board," said Bueckert.

She said so far, two hotels are on board with the signs and a third one is joining on as well. She hopes this will spark other businesses to start up too.

"There's so many people that drive by your business and we might be shut down, I think there is so much talk right now on restrictions and stuff like that, and it's time we just switch the focus and let's do something fun."

Bueckert said Motel 6 was the one that started the challenge, which was followed by a response from Super 8 saying, "Hey Motel 6 sure, we're super at this."

"It keeps people engaged. It just brings people some joy and some laughter."

She added while having the extra attention is nice, considering how hard businesses have been hit during the pandemic, she said the main goal is just spreading some happiness.

Bueckert hopes other businesses in the city will join on and if they decide they want to, she said people should call her at 204-325-0578, saying the more the merrier.

"If we can offer just a little smile, it could change somebody's day. So even if we can just do that, we're very happy to be a part of it."

Sign wars have popped up throughout Canada and North America, including a battle between Speedy Glass and Dairy Queen in Listowel, Ont.