WINNIPEG -- A 31-year-old has been arrested by Winnipeg police after officers seized 28 guns including some restricted weapons and 3D printed versions of weapon parts that can't be purchased.

For the first time in Winnipeg, some of the weapons seized are what are known as “ghost guns”.

On May 14, the Winnipeg Police Services Firearms Investigation Enforcement Unit (FIEU) was notified by the Chief Firearms Office that a man in Winnipeg tried to buy a prohibited part for an AR-15 from a firearms reseller.

On May 20, FIEU executed a search warrant at a home in the first 100 block of West Avenue. Of the 28 guns found, 10 were registered restricted handguns, one was a registered prohibited firearm and there were 17 other various long guns.

As part of the investigation, officers learned a lower-end receiver for an AR-15 was created from a 3D printer. 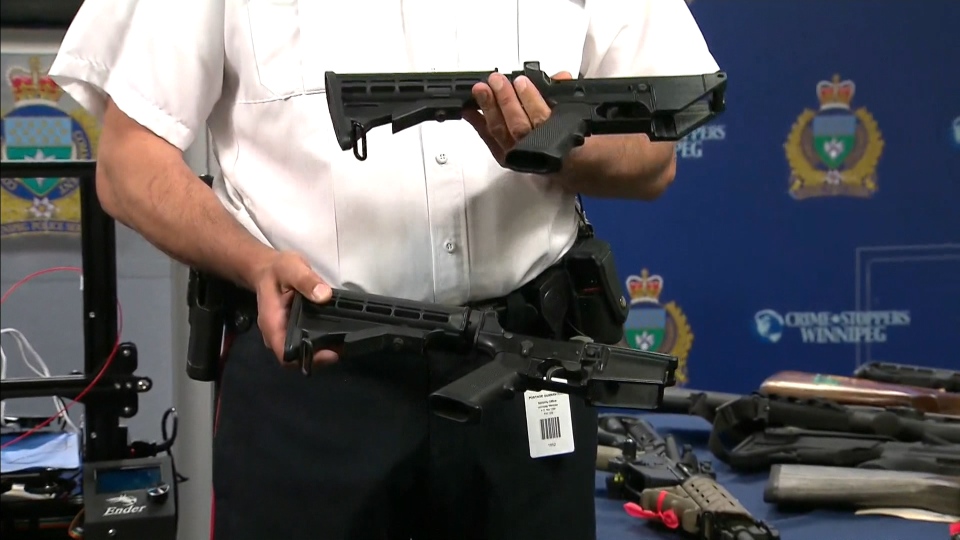 (Police show off two lower-end receivers for an AR-15. The one on the top was made with a 3D printer, police said, while the one below is an example of a receiver that was commercially available prior to the May 1 ban.)

Police also learned that a lower receiver for a Glock 19 was created by a 3D printer and fitted with a legitimate Glock upper receiver.

Police said these guns are known as ghost guns, which means it has no serial number or other markings to identify the weapon.

"Ghost guns are the latest trend in firearms manufacturing," said Insp. Max Waddell. "I can only think of one reason why anyone would manufacture a firearm that cannot be registered or detected and that is to circumvent the laws that are in place to protect us all."

Waddell also said that these guns can be made rather easily.

"Unfortunately by going on the internet there are step-by-step instructions for anybody to follow. So I don't consider this to be highly sophisticated. It's more just someone with drive and the know-how."

He added that when the weapons are made they consist of plastic and that they can be very hard to find, noting they wouldn't be recognized going through a metal detector at an airport.

Police also said one of the registered handguns was not located and was not reported lost or stolen, which police say is required by law.

On June 1, Corey James Boyd, 31, was arrested and charged with weapons trafficking, possessing a firearm knowing its possession is unauthorized and not reporting a lost firearm or weapon.

Police said the investigation is ongoing and there is potential for future charges. The charges against Boyd have not been tested in court.