WINNIPEG -- Ten people have been arrested after an investigation dubbed Project Highland was launched in April into what Winnipeg police called a sophisticated interprovincial organized crime network. It culminated with the simultaneous execution of eight raids last Wednesday in Winnipeg, rural Manitoba and Ontario.

Winnipeg Police Service Inspector Max Waddell said at a media conference Monday the primary activities of the organized crime group involved the transportation of multiple kilograms of cocaine, opioids and significant amounts of illegal cannabis and tobacco from southern Ontario into the city of Winnipeg.

Waddell said the impact of the raids on the crime network will be far-reaching. 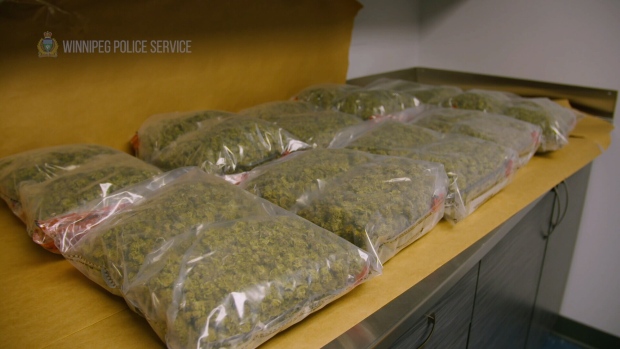 Here is a list of the items that were seized during the raids:

Waddell said the cocaine seized came directly from Mexico and is some of the purest police in Winnipeg have encountered in the past 15 years. Southern Ontario was a drop-off point for the product before it was moved into Manitoba, he said.

Police said the illegal cannabis was being produced in southern Ontario.

About 160 officers from the Winnipeg Police Service and Ontario Provincial Police were involved in the raids. Manitoba Finance and Taxation were also involved.

The following people have been arrested and charged with a total of 34 criminal code offences related to conspiracy and trafficking of a controlled substance: