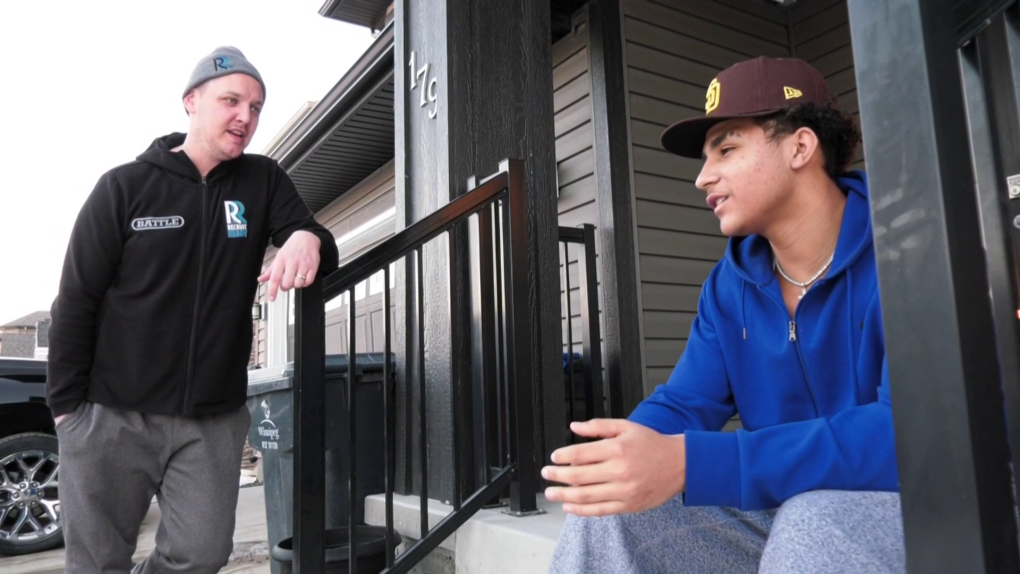 Football coach Blair Atkinson speaks with Dallas Sims outside of his home. Sims, 15, has received interest from U.S teams for his play on the gridiron (CTV News Photo Rachel CrowSpreadingWings)

WINNIPEG -- A Winnipeg teen’s football skills are getting attention from post-secondary schools south of the border.

“Hopefully, I can be a Winnipegger that makes it to the NFL,” the 15-year-old said.

He has already been scouted by schools like Iowa State.

He started playing football at the age of 7 and said football is an outlet for his energy.

The game, he said, is in his blood.

“My dad played football, so I kind of learned off of him, and he put me it in and (I) scored my first play I ever played, so I just fell in love with the game,” said Sims.

In 2019, he was named Winnipeg School Football League JV Offensive MVP and the 2019 MVP of Dakota Collegiate.

He played running back, but after hitting a growth spurt, Sims said he is now a wide receiver.

“My vertical (leap) is pretty high, so I can jump up at the highest point and catch the ball,” Sims said. “I’m very smart on the field, so I can see when the defence lines up in a certain way, so in a way, I can figure out my route faster.”

“He shows that on the field, off the field, communicating with his coaches, being good with his teammates, all the things top-level coaches look for,” he said.

“He’s got a great ability to find the ball at its highest and get up and get it,” said Atkinson.

“There’s no reason why he can’t do it too with the skill set he has and the hard work and dedication to the sport,” said Atkinson.

Next year, he is heading to the Clearwater Academy in Florida to help get him to the next level.