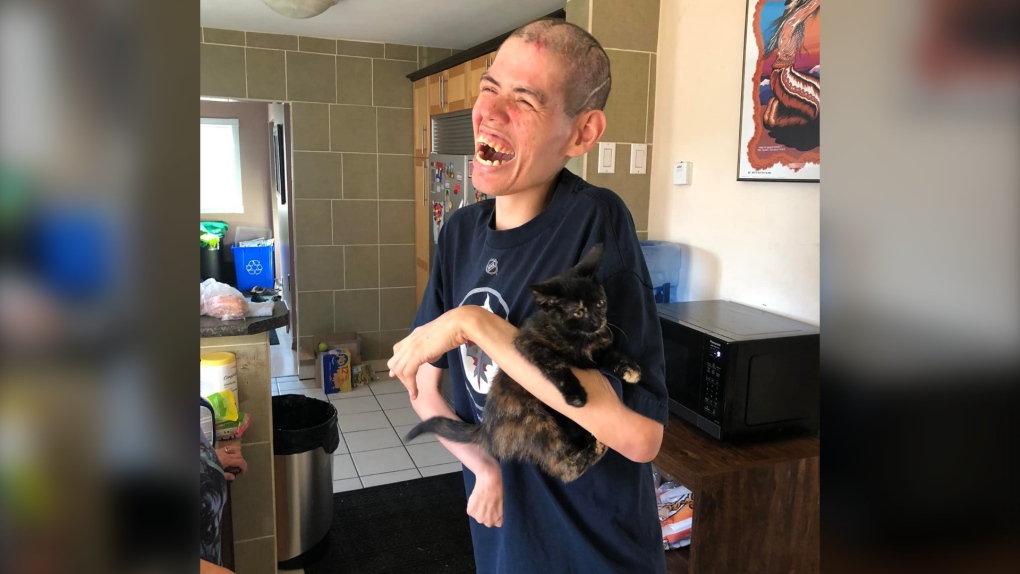 Mathew, who has cerebral palsy, was accused of stealing an employee's phone at a Winnipeg Walmart in October. (Source: Facebook)
WINNIPEG -

A Winnipeg woman is calling on Walmart for an apology after her grandson, who has cerebral palsy and is non-verbal, was accused of stealing an employee's phone in October.

Joyce Stevenson was told by a caregiver that her grandson Mathew, 30, was accused at the Walmart on Regent Avenue on Oct. 15.

Stevenson was told that Mathew and the caregiver were going to the washroom at the store when there was banging on the handicapped stall and a woman was yelling that her phone had been stolen.

"As I was opening the door to figure out what was going on, she had pushed the door open and it had hit Mathew in the head," the caregiver said.

The caregiver said Mathew was fine and that his head was a little red after the incident. She then told the woman, who was an employee, that there was no phone in the washroom and they didn't have the phone either.

Stevenson said when she heard what happened, she was extremely upset.

"Mathew does not know how to steal anything, he is non-verbal," said Stevenson, "He doesn't understand stuff like that."

Mathew and the caregiver were approached by security after leaving the washroom but were allowed to leave a short time later.

The caregiver then spoke to a manager at the store, but she said, "He didn't seem too concerned about the issue at all."

She has reached out to Walmart Canada's complaint line and even sent an email to the CEO.

The caregiver received a call from another manager last week, a month after the incident, saying it was the first he had heard of it and it was being looked into.

Stevenson says it's not right that it has taken this long to hear something from the store and she feels an apology is needed at the very least.

"I'm still upset about it. I think they should do something about that," said Stevenson.

A spokesperson for Walmart Canada said the company takes issues like this very seriously and the matter is being looked into.

"Respect is a core value at Walmart Canada and we do not condone any behaviour which contradicts this value, including discrimination and racism," the spokesperson said. "Walmart is committed to providing a safe and inclusive environment for our associates and our customers. Celebrating diversity and fostering inclusivity is an integral part of the Walmart culture and we are proud to reflect the diverse communities we serve through our associates."

Transport Minister Omar Alghabra is assuring Canadians there's no reason to fear food shortages will result from a small minority of truck drivers refusing to comply with a vaccine mandate in order to cross the Canada-U.S. border.

As the global pandemic enters its third year, initiatives like Bell Let's Talk Day aims to help people of all backgrounds and age groups struggling with the mental health, especially amid the impact of COVID-19.

Economic eyes will be on the Bank of Canada this morning as the central bank is scheduled to make an announcement about its trendsetting interest rate.

An infectious disease expert believes the global response to the COVID-19 pandemic has been an 'unmitigated disaster' and the rapid spread of the Omicron has made another variant a near certainty.

A British Columbia First Nation has announced the grim discovery of 93 potential burial sites on the grounds of a former residential school.

The Bank of Canada is set to make an announcement on interest rates, the Transport Minister says there’s no need to fear a food shortage from the trucker vaccine mandate, and a prosecutor in Mexico says the killing of two Canadians was motivated by a gang debt. Here's what you need to know today.

Killings of Canadians in Mexico due to gang debt: prosecutor