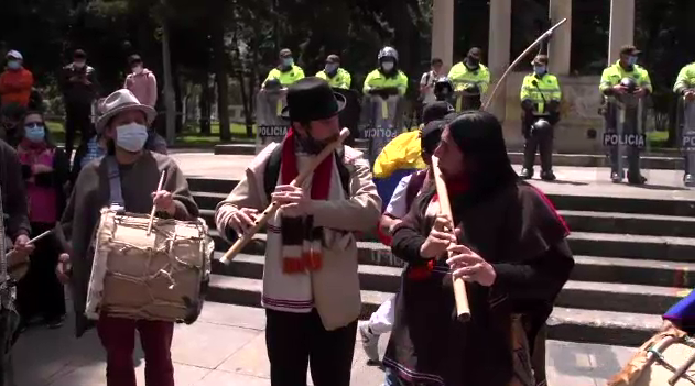 WINNIPEG -- Nationwide protests in Colombia have prompted Colombians living in Winnipeg to call on the Canadian government to take action.

A recent tax reform bill passed by the Colombian government was the catalyst for days of protest that have turned deadly, with at least 26 deaths.

"We need that to stop. I think the Colombian people are tired, the tax reform was the tip of the iceberg," said Lizeth Ardila, a Colombian living in Winnipeg and awareness campaign organizer.

High COVID-19 case numbers, unemployment concerns and human rights violations have added fuel to the protests, according to Luisa Isidro, another organizer.

"Right now, the government is responding in a militarization way, repressing people," said Isidro. "People just started to understand that the tax reform is just something that's not acceptable during the pandemic."

Both organizers are calling on the Canadian government to hold the Colombian government accountable for the human rights violations and join the international community in demanding an end to police brutality and the use of armed forces against the protestors.

Colombians living in Winnipeg were planning on gathering Saturday to support the demonstrators in Columbia, but the awareness campaign doesn't stop there. People can follow the protests through the social media hashtag #SOSCOLOMBIA.

To help Isidro and Ardilo recommend people help get the word out.

"If they have Colombian friends, or if they've seen videos posted on social media, repost them. We need to spread the word. We need to make sure that this is well known internationally," said Ardila.