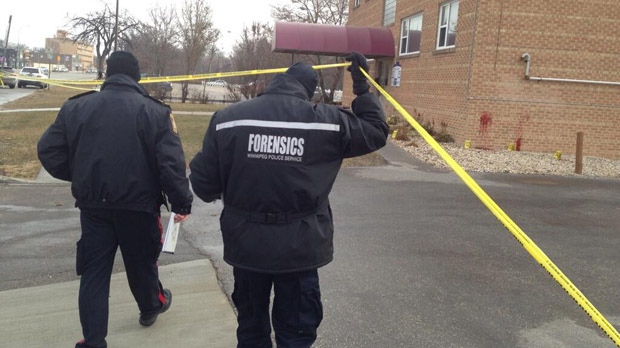 Police on the scene of an assault that left one man dead and two others in hospital Friday, Nov. 15.

Winnipeg police said a 32-year-old suspect faces a murder charge for a fatal stabbing in the 2100 block of Portage Avenue.

Around 9 p.m. on Nov. 15, officers and emergency crews responded to the 2100 block of Portage Avenue for a report of a man assaulted.

Crews located a 32-year-old woman and a 42-year-old man and transported them to hospital in stable condition.

Crews also rushed a 39-year-old man to hospital in critical condition. He later died from injuries.

Officers identified the man as Brandon Lee How of Winnipeg.

Police said three people had been socializing when the two men got into a fight, which led to the 42-year-old man suffering upper body injuries.

An altercation then broke out between the female suspect and the 39-year-old male victim. Police said the victim was stabbed in the upper body.

The homicide unit continues to investigate.