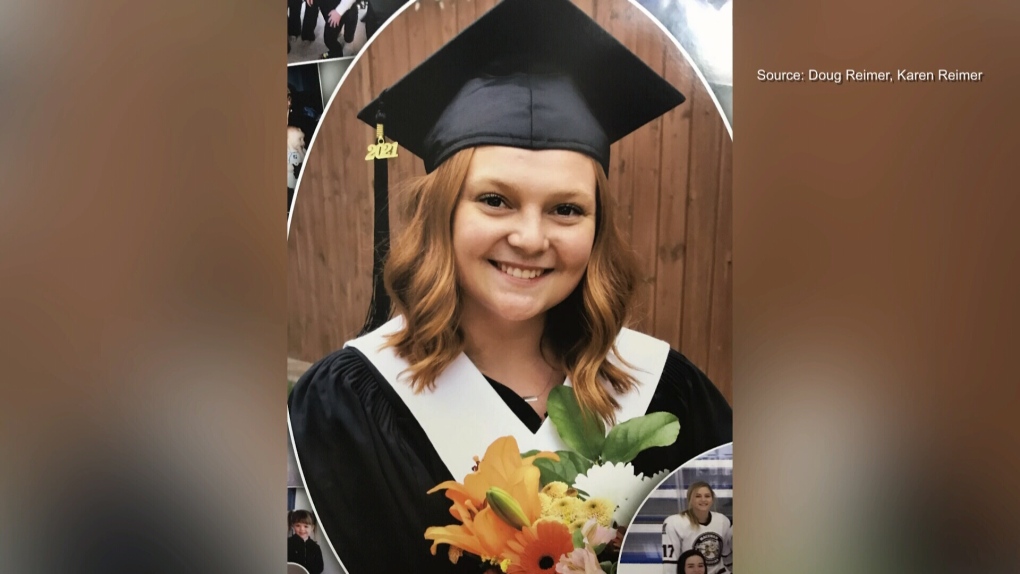 Jordyn Reimer, 24, was killed in a crash involving an alleged drunk driver in Winnipeg on May 1, 2022. She is being remembered for her kindness and willingness to help others. (Submitted)

A 24-year-old Winnipeg woman who was killed earlier this year in a crash involving an alleged drunk driver will be honoured at Friday’s home opener for the MacEwan University women’s hockey team in Edmonton.

Jordyn Reimer died in May 2022 when the driver of a pickup truck crashed into her vehicle in a residential neighbourhood in Transcona.

Jordyn was a graduate of Transcona Collegiate and MacEwan University, where she was a player for the MacEwan Griffins women’s hockey team.

On Thursday, MacEwan University announced that Jordyn’s family will be at the Griffins home opener on Friday, where a copy of the banner that hangs in the rafters will be presented to the family. The banner features Jordyn’s name and #9.

Chris Leeming, interim head coach, said they want every single Griffin, from now and into the future, to know exactly who Jordyn was, what she brought to the team and the impact she had.

"We are playing for her. I know it will be a little hard at first, but it will be nice to be surrounded by everyone at least,” she said.

Jordyn’s sister Nikki Reimer, who played on the Griffins with Jordyn, will be in attendance at Friday's game, along with her parents Doug and Karen and sisters Alex and Andrea.

Nikki said it’s difficult to come to terms with the fact that Jordyn won’t be there on Friday, but it’s special to see the program honour Jordyn and share her impact.

"I know Jordyn's time at MacEwan was so special to her. It meant the world to her. She loved her time there,” she said.

“She loved the friends and connections she made. It's just special to see the program and the coaches and the girls reciprocate how much Jordyn meant to them as well."

Nikki said it’s impossible to describe in just a few words what Jordyn meant to her.

"She was my best friend. All my sisters, we like to say we're each other's soulmates,” she said.

"She still means the absolute world to me, and she always will."

Prime Minister Justin Trudeau made an appearance on Friday's episode of "Canada's Drag Race: Canada vs. the World" to offer the contestants words of inspiration before the main challenge.

A new study has confirmed the authenticity of an ancient Roman coin long considered fake but which researchers now believe depicts the image of a forgotten emperor.

Prime Minister Justin Trudeau gambled just by showing up. And he appears to have won in the court of reasonable public opinion, Don Martin writes in an exclusive column for CTVNews.ca.

'What if the worst had happened': Trudeau explains why he invoked Emergencies Act when he did

On the stand at the federal inquiry examining the federal government's invocation of the Emergencies Act, Prime Minister Justin Trudeau revealed candidly that a central factor in his historic decision to enact unprecedented powers to shut down the 'Freedom Convoy' protests, was his fear of what could happen if he didn't.

NASA's Orion capsule entered an orbit stretching tens of thousands of kilometres around the moon Friday, as it neared the halfway mark of its test flight.

A marriage annulment that removed a B.C. woman as a beneficiary from her ex-husband's pension plan has been cancelled after a judge determined an "imposter" had agreed to the terms in court.