'You always need to be prepared': How to stay safe on the ice this winter

'You always need to be prepared': How to stay safe on the ice this winter 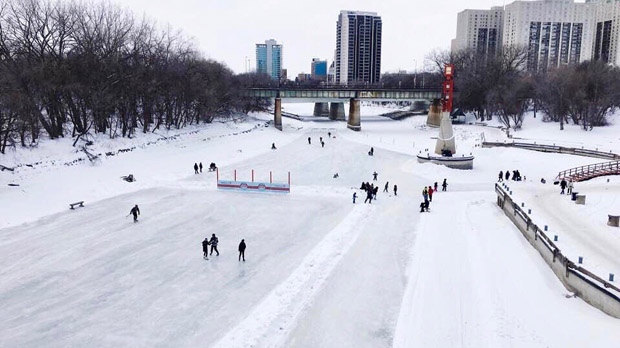 It may be starting to feel more like a Manitoba winter now, but that doesn’t mean people should be less cautious around the ice, according to one expert.

Christopher Love, the water smart and safety management coordinator for Lifesaving Society Manitoba, said people always need to be aware when near ice, noting it’s never “100 per cent safe” and it is “always unpredictable.”

“If you are going to go out on the ice, then you always need to be prepared to go through it and into cold water,” Love said, adding people need to plan ahead.

To plan ahead, Love recommends having safety gear such as a life jacket, personal floating device or a floater coat – which provides the wearer with insulation as well as the ability to float.

He suggests people should also carry items like ice picks or an ice staff to give themselves extra traction if they do fall through the ice.

If someone does fall through into the water, Love said the first thing to remember is to try and stay calm.

“If you’re panicking it makes it more likely you’re going to have a bad outcome because you’re more likely, in that case, to end up below the surface of the water, which also means you can get trapped under the ice.

“When you go through that ice and into ice cold water, the first thing that’s going to happen is called cold shock. It’s going to cause you to gasp or to hyperventilate, and you’re really not going to be doing anything except that gasping and hyperventilating for about the first minute to two minutes.”

When equipped with the proper floating devices, Love said it gives people the frame of mind to know they aren’t going to drown and allows them to turn their focus to calming down, slowing their breathing and working out a solution to get out of the water and onto dry land.

For those who may be around and witness someone falling through the ice, Love said they should never go on the ice to rescue them, noting they could fall in as well. He said calling 911 should be the first step and then trying to find a long object like a tree branch, hockey stick or even rope to get to them to try to pull them out of the water.

According to the latest numbers from the City of Winnipeg, there have been two calls to the Winnipeg Fire Paramedic Service this month for water/ice rescue calls.

The city notes the calls could be made for a variety of reasons.

One of the largest sections of ice the city sees every winter is the Nestaweya River Trail, which is operated by The Forks.

Zach Peters is the communication and marketing manager with The Forks and said a lot of work goes into making sure the river trail is safe before people can access it.

“(Our team does) extremely diligent work in terms of ice testing and depth testing of the ice. And continually in December before we get up and running in early January, they’re making sure that the ice is thick enough and good enough for folks to be on before, obviously, we open anything to the public,” said Peters.

Once the trail is completely open, Peters said there is daily monitoring to ensure the trail stays safe.

When the weather starts to shift again, Peters said they close off segments of the trail as needed until it all gets shut down to make sure everyone is safe.

A local community group in Wolseley also makes sure people are able to enjoy a chunk of the river trail as safely as possible.

Wolseley Winter Wonderland is a group of volunteers who take time out of their day to help maintain trails on the Assiniboine River.

Ross Brownlee is one of those volunteers and said they do everything from shovelling steps down to the river to flooding the ice to make sure it is as smooth as possible.

“I think everybody who volunteers loves being on the river. We feel that it’s one of Winnipeg’s biggest assets,” said Brownlee. “It’s a terrific playground and we would like to share it with as many people (as possible).”

Brownlee said a lot of their work starts before winter comes by preparing the access points down to the river in the fall. Then, during the winter, volunteers are out three to four times a week taking care of the ice.

He feels the work the group does helps improve the overall experience.

“People have been going on the river forever, long before this group started doing, sort of, formal maintenance and they were fine. But I think it’s an enhanced experience and maybe it invites a few more people to go down and make the river part of their day.

While the river trail is monitored by The Forks, the city said it only monitors ponds for skating in regional parks.

“The City does not monitor ice conditions on rivers, waterways, or ponds through the winter months. Due to the possibility of rapidly-changing ice conditions based on weather, currents, run-off, etc. residents are urged to use caution around all frozen waterways,” the city said.

It's a sentiment that is echoed by Love, who said people should always be with others if they are going to make the trek onto the ice.

He added if kids are out on the ice, they should be monitored by an adult at all times and if they are a young child, an adult should always be at arm's length of them to ensure their safety.

After a radioactive capsule went missing in Australia, could the same happen in Canada?

After a tiny radioactive capsule went missing in the Australian outback, an expert in Canada says the likelihood of the same happening in this country is unlikely, given our strong regulations governing the handling of radioactive materials.

As Black History Month gets underway, Canada Post has unveiled a new stamp honouring Chloe Cooley, a young Black woman who was known to challenge her enslavement in the late 18th century.