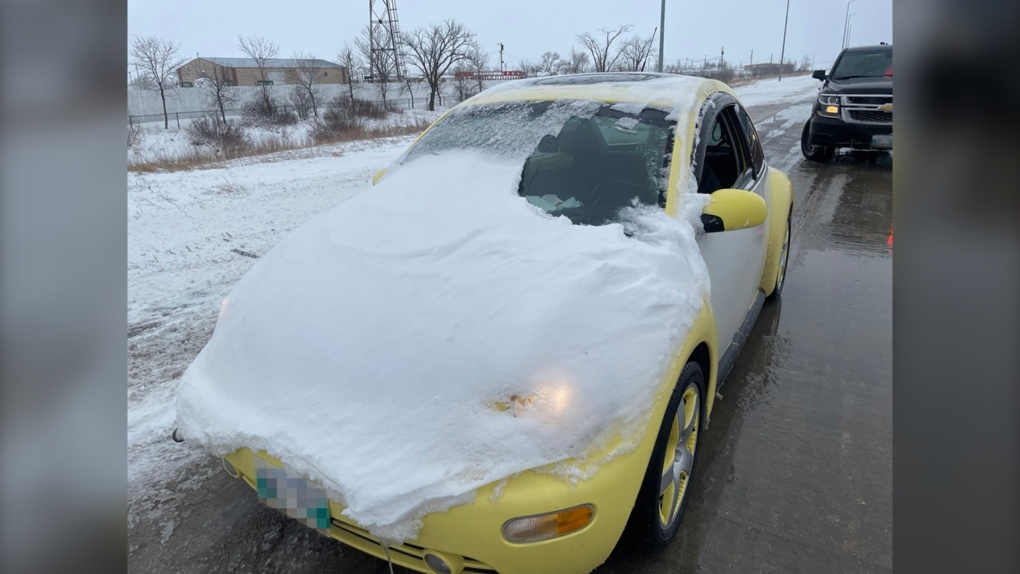 Manitoba RCMP said a 17-year-old driver was handed a $113 fine for driving with their view obstructed by snow on April 13, 2021. (Source: Manitoba RCMP)

WINNIPEG -- With a fresh layer of snow in a spring storm, Manitoba RCMP are reminding drivers to clear off their vehicles before hitting the road—if you don’t, you could wind up with a hefty ticket.

Manitoba RCMP said a 17-year-old driver was handed a $113 fine for driving with their view obstructed by snow. Mounties said the driver had been driving along the Perimeter Highway. The car's windshield was covered in a blanket of snow—except for a small section that had been scraped clear.

RCMP said along with the fine, the driver was told to clear off the snow before continuing on.

Cpl. Julie Courchaine, a media relations officer with the Manitoba RCMP, told CTV News so far this is the only ticket that has been issued in the last two days.

"I would say most drivers are brushing off the snow and ensuring their windows are clear," Courchaine said in an email. "We don’t come across vehicles like the one posted very often … which is, of course, a good thing."

Manitoba RCMP said it is important that Manitobans clear their vehicle's windows of snow to keep themselves and others on the road safe.

At 08:30 this morning, an officer patrolling the Perimeter Hwy (near Rosser Rd), saw this vehicle travelling southbound. 17yo driver issued a $113 fine for “Drive a vehicle when view obstructed by snow” & instructed to clear off the rest before proceeding. #noexcuses #rcmpmb pic.twitter.com/Vw6oIgjM8E