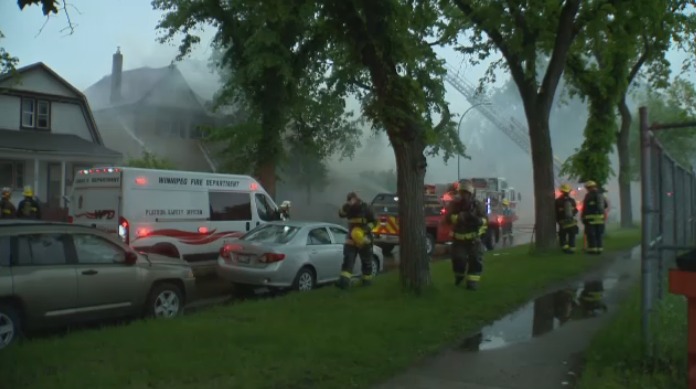 A push is on at Winnipeg City Hall to crack down on derelict properties prone to fire.

Laura Novak lives down the street from a vacant property on College Avenue, that went up in flames last month.

"It was a little scary the last fire that was here cause it did take out the other house right beside it," said Novak.

16 people were forced to leave that home next door, and three firefighters were sent to hospital battling the blaze.

"I don't like them because it has a tendency to draw in unsavoury elements," said Novak.

City council passed a motion Thursday spearheaded by Coun. Kevin Klein, to explore the idea of having homeowners of vacant buildings pick up the tab, for what it costs the city to battle these types of fires.

Klein says the price tag would include salaries, equipment, and water use. It's estimated the cost to tackle a fire at a single-family home is upwards of $10,000.

There would be exceptions where owners wouldn't have to pay, including unrelated arsons and fires caused by natural disasters and vehicle collisions.

In a statement, Winnipeg Fire Paramedic Service (WFPS) Chief Christian Schmidt said the service has already been working with other departments on a cost recovery plan and says the motion is helpful in moving this forward.

“We also continue to work with the city’s finance, legal and bylaw teams to determine any limitations, and identify any challenges or roadblocks to this ongoing work,” said Schmidt.

Coun. Ross Eadie says there are more than 200 vacant properties in his ward alone. He says while fines and penalties will convince some owners to act, they won't move all of them. He'd like to see the city do weekly inspections to make sure derelict buildings are properly boarded up and that no one is inside.

"Ultimately, the people who end up living next to these things, are the victims," said Eadie.

Novak says whatever it takes to make her neighbourhood safer, as this was not the first blaze at the vacant house on her street.

"I am not sure how this fire started, but I know the fire before started because there were people squatting," said Novak.

The WFPS says between January and March this year it responded to at least eight vacant building fires. It also says the number of fires in vacant structures more than doubled between 2017 and 2021, from at least 30 fires in 2017 to at least 64 fires in 2021.

The federal Liberals are withdrawing an amendment to their guns bill that introduced a controversial new definition of an assault-style weapon.

Canada's egg industry appears to be quietly sidestepping widespread shortages and wildly spiking prices affecting other countries, and some say supply management is to thank.

Most of Ontario is under an extreme cold warning as a blast of Arctic air delivers biting wind chills.

Could the fungal outbreak in The Last of Us happen for real?

The post-apocalyptic TV adaptation of the video game The Last of Us has some wondering about the real-life possibility of a global pandemic caused by fungus, and one expert says it’s not a concept to dismiss.

Big tech companies that offer online streaming services could soon be required to contribute to Canadian content as a controversial Liberal bill gets one step closer to becoming law.

China: Balloon over U.S. skies is for research, wind pushed it

China said Friday that a balloon spotted over American airspace was used for weather research and was blown off course, despite U.S. suspicion it was spying. The discovery further strained already tense relations between Beijing and Washington.

Lives were 'shattered' when Kabul fell into Taliban hands, and thousands remain in limbo, unable to return to Afghanistan. CTV News' Genevieve Beauchemin recalls her visit to makeshift refugee camps set up in Pakistani parks, and the stories she heard during that time.