'Everybody else needs this education': Rally held against residential schools and Bill 64

'Everybody else needs this education': Rally held against residential schools and Bill 64 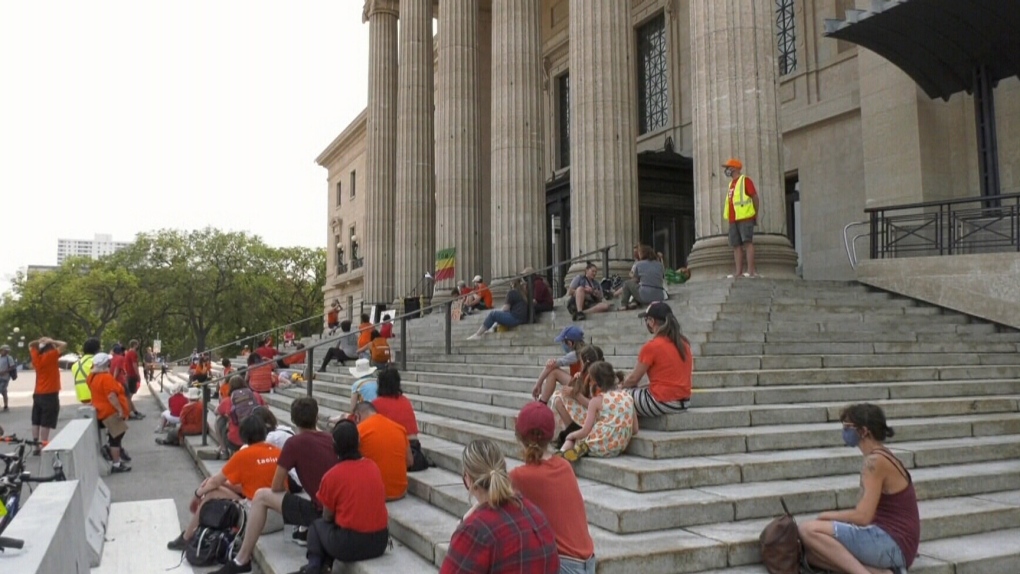 Close to 100 people gathered on the front steps of the Manitoba Legislative Building to protest against inaccuracies on residential school history and Bill 64.

The rally was planned after the new Minister of Indigenous Affairs, Alan Lagimodiere said in a Thursday press conference that the architects of residential schools thought they were doing the right thing.

Organizer of the rally and school teacher, Michael Kirkness said the topic of residential schools needs to be a bigger focus in the Manitoba curriculum.

In light of those comments, he’s concerned about how much authority Bill 64 will give the PC government as it relates to education.

“There has to be some kind of understanding between Indigenous and non-Indigenous people, and that revolves around education.”

Kinew said we have to call those comments out, and spoke about the need for education and understanding.

“Unless we have a true understanding of the situation, we’re not going to be able to move forward,” said Kinew. “If we have an MLA who does not understand the truth of residential schools, it’s going to be very hard to have a minister who can advance reconciliation.”

Lagimodiere has since apologized for his comments.

One of the many attendees at the rally was Wayne Stranger.

He was a teacher in the province, and said he saw a lack of representation for Indigenous people in the curriculum.

“What I saw in those 10 years was a lot of biases still in the system. About who we are as a people, where we come from, what our knowledge base was and is today.”

In a statement to CTV News, Minister of Education, Cliff Cullen said in part:

“Providing Indigenous Traditional Knowledge and teachings to all students remains our priority with a stronger presence and value on Indigenous knowledge and perspectives. Our Better Education Starts Today strategy commits to supporting reconciliation by enhancing all educators and students’ understanding of the Treaties, residential schools and Indigenous people’s past and present contributions.”

One commitment outlined in the Our Better Education Starts Today strategy is to increase the presence of Indigenous perspectives in the K to 12 curriculum.

Kirkness said most Indigenous people know about residential schools, but it’s something that all Canadians should know about.

“(Indigenous people) know full well about what happened, and what continues to transpire as a result of that," said Kirkness. "Everybody else needs this education. All the children that are in our system need to understand this.”