'It takes them one step closer to closing': business prof on reduced hours at Winnipeg Hudson's Bay stores

WINNIPEG -- A business school professor said reduced hours at the downtown Winnipeg Hudson’s Bay location could signal an uncertain future for the store, and it isn’t the only location cutting back.

As soon as the holiday shopping season ends, the downtown store will open from 11 a.m. to 5:30 from Monday to Saturday, and 12 to 5 p.m. Sundays.

A spokesperson for the Hudson’s Bay Company described the new hours as “winter hours only”, and said the hours would not apply in the spring.

“It takes them one step closer to closing,” said Subbu Sivaramakrishnan, a faculty member in the department of marketing and associate dean at the Asper School of Business. He said he’s not surprised the downtown store is opening later and closing earlier.

“The Hudson’s Bay Company has not been doing well financially, of late,” he said, suggesting the move is likely being made to help the bottom line by reducing employee costs.

Last summer, BNN Bloomberg reported the retail chain was looking at the possibility of closing some stores across Canada, as well as restructuring lease agreements.

The downtown Winnipeg store is located in a heritage building that an appraiser recently judged as worthless. The department store’s operations once spanned six stories, including a restaurant on the top floor and a snack bar in the basement, which previously housed a grocery store and a Zellers.

Today the retail operations are confined to only the first two stories, and recently an annual craft sale that operated out of the basement announced it would be moving to a new location for its next event.

ANOTHER WINNIPEG LOCATION CUTTING BACK

The location in St. Vital Centre is also cutting down, operating fewer hours than the rest of the mall. Its post-holiday hours see it opening 30 minutes later than other stores and closing an hour earlier.

“With the culmination of our extended holiday hours, we are now instituting winter hours at stores across the country to best serve our customers in the most efficient way possible,” said the statement from the HBC spokesperson.

The CF Polo Park location, also in Winnipeg, continues to be open during all regular mall hours.

“I would suppose they did their analysis to see which were the slow hours, in terms of sales, and so they reduced their hours accordingly,” Sivaramakrishnan said.

“Honestly, it doesn’t look very good,” he said. “Because the good way to increase the financial health of an organization is to increase revenues, at the same time trying to cut costs, but clearly here they’ve had trouble keeping the revenues up, so they’re trying to reduce the costs.”

Sivaramakrishnan said increasing competition from online shopping, as well as retails stores in more suburban areas, has made the downtown Winnipeg location less attractive to shoppers, especially in the evening. 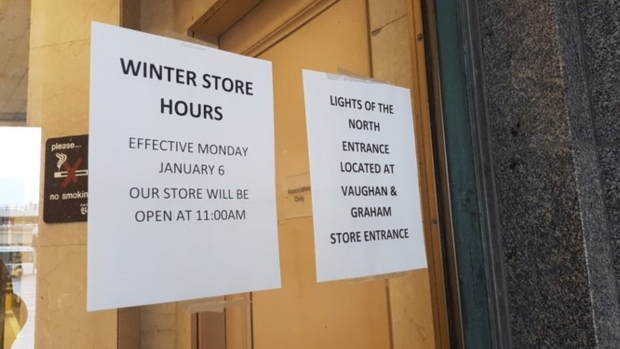 Sivaramakrishnan didn’t believe the reduced hours would have a great impact on consumers, since the store likely cut hours when fewer people were shopping anyway.

“This is obviously in response to what they’re seeing in consumer behaviour,” he said.

“The problem that The Bay is facing is not unique to them,” he said. “Department stores, other major chains, such as Macy’s and JC Penney and Nordstrom, they’re facing the same issues.”

-With files from CTV's Devon McKendrick and Zachary Kitchen