Jets bolster defence, but goaltending could prove thin behind Hellebuyck 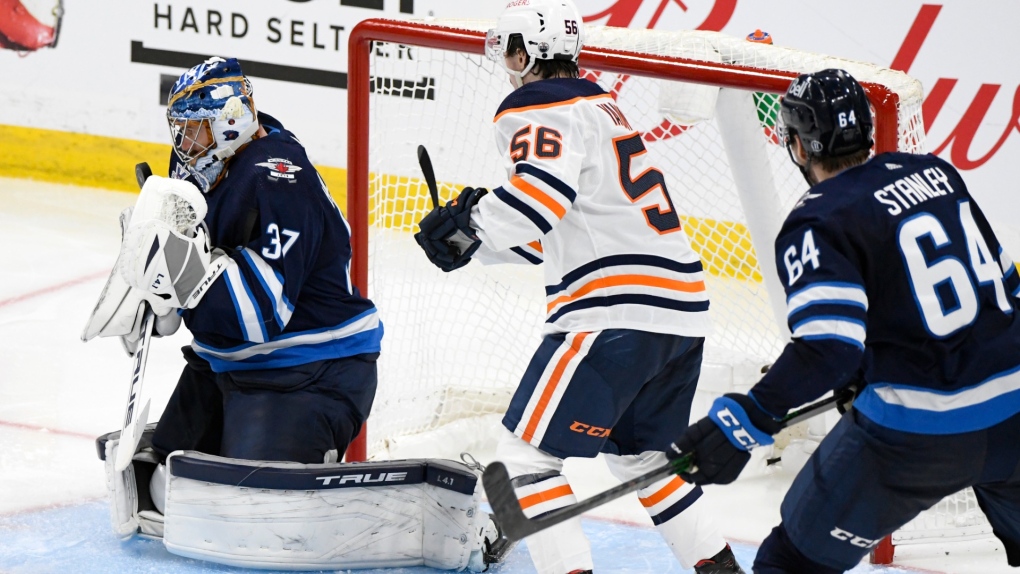 The Winnipeg Jets may have filled some holes on defence in the off-season, but there's uncertainty about the team's fortunes when all-star goalie Connor Hellebuyck gets a night off.

Trades brought veteran defencemen Nate Schmidt from the Vancouver Canucks and Brenden Dillon from the Washington Capitals, each costing future draft picks instead of roster players. Both have been welcome additions on and off the ice.

As a smiling Schmidt sat beside forward Blake Wheeler during a press conference this week, the captain praised the fun-loving newcomer.

"I think his personality has been a real boost for our team," said Wheeler, whose demeanour often leans toward the serious side.

Winnipeg's defensive corps has been lacking experience and grit the past few seasons after the departures of players such as big Dustin Byfuglien and Jacob Trouba.

The new pair is expected to deliver on both.

Schmidt has played 450 NHL games, scoring 34 goals and accumulating 155 points. The 30-year-old is slotted on the top pairing with Josh Morrissey.

Six-foot-four Dillon is also 30 and has 654 NHL games on his resume, including 24 goals and 133 points. He fills out the second pairing with Neal Pionk.

"Schmidty can get up the ice and break the puck out, make a great first pass. Same with Dilly," Wheeler said. "Dilly brings a little bit of edge to our back end.

"Like I said before with Nate, just two incredible additions to our locker room, too. They were both home runs."

Schmidt said the transition to feeling part of the team has been smooth.

"It doesn't feel like it's only been three weeks, and that's something that is a great thing for myself, (Dillon) and guys that are new coming in."

The Jets are coming off a pandemic-shortened season in which they had early success in the playoffs, sweeping the favoured Edmonton Oilers in the best-of-seven first round of the all-Canadian North Division.

Winnipeg then got a taste of the same medicine, falling in four straight games in the division final to the Montreal Canadiens, who went on to lose the Stanley Cup championship to Tampa Bay.

While the Jets bolstered their blue line, their last line of defence took a hit when backup goalie Laurent Brossoit signed with Vegas. He played in 14 games last season, including 11 starts, posting a 6-6-0 record.

The Jets responded by signing netminder Eric Comrie, a familiar face with the organization for three seasons from 2016-19. He's played a total of nine NHL games, including one with New Jersey last season and three for Detroit in 2019-20.

Comrie's pre-season performance has drawn angst from some Jets fans. He got into two games, losing in regulation and overtime with a 3.53 goals against average.

Winnipeg head coach Paul Maurice said Comrie is showing signs he can be a viable backup to Hellebuyck by stopping difficult shots in practices.

"The next is just going to be some body-positioning experience in the net, because these guys are faster, bigger, the puck moves quicker," said Maurice, who's in his ninth season with the club.

Hellebuyck revealed at the start of training camp that he contracted COVID-19 in late August when he was unvaccinated. The 2020 Vezina Trophy winner experienced bad headaches and fatigue, and then had similar symptoms after getting vaccinated. He went through a battery of tests at camp and said he's feeling fine.

SCHEIFELE ON THE SHELF

Top-line centre Mark Scheifele will sit out Wednesday's season-opener in Anaheim as he finishes a four-game suspension for charging Canadiens forward Jake Evans in Game 1 of their playoff series. Paul Stastny will replace him between Wheeler and Kyle Connor. Stastny signed a one-year deal to stay with Winnipeg and has been on the third line.

Expectations are high for the second-line trio of centre Pierre-Luc Dubois and wingers Andrew Copp and Nikolaj Ehlers. Dubois is ready to bounce back from last season, when his trade from Columbus only resulted in eight goals and 20 points in 41 games. Ehlers has worked on boosting his already-impressive speed, while Copp has been promoted from the third line after a career season for goals (15) and points (39) in 55 games.

The Jets play six of their first eight games on the road, including two trips to California with a pair of home games and a visit to Minnesota sandwiched in between.

This report by The Canadian Press was first published Oct. 12, 2021.