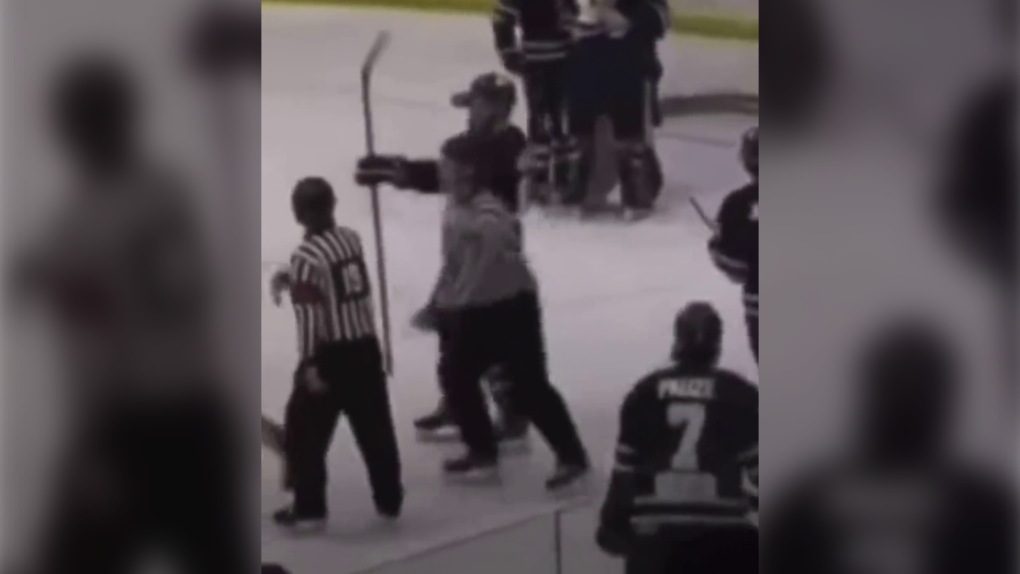 A video posted on social media by Hockey Indigenous shows Klim Georgiev of the Dauphin Kings performing a gesture mimicking the use of a bow and arrow following the conclusion of a MJHL game between the Kings and the Waywayseecappo Wolverines on Feb. 19, 2022. Georgiev received a gross misconduct and was suspended following the game, and the MJHL is investigating. (Video screenshot: Twitter- Hockey Indigenous)

A player with the Dauphin Kings has been suspended indefinitely by the Manitoba Junior Hockey League (MJHL) after taunting a hockey team with an alleged racial gesture over the weekend.

The incident took place at the end of Saturday’s game between the Kings and the Waywayseecappo First Nation Wolverines, which the Kings won 3-2.

At the end of the game, which was streamed online, defenceman Klim Georgiev can be seen skating and making a gesture that allegedly mimicked firing a bow and arrow towards the Wolverines.

Video of the incident has circulated on social media after it was posted online by Hockey Indigenous, an organization that aims to promote Indigenous involvement in hockey at all levels. It called the incident “beyond disgusting and hurtful.”

Stephane Friday, the co-founder of Hockey Indigenous, said it was baffling seeing the video.

"It does get to me. It's 2022 and we keep talking about reconciliation," said Friday.

Georgiev, who is 20, received a gross misconduct penalty following the game. The MJHL announced on Sunday on social media that Georgiev was suspended.

“The MJHL takes situations of this nature seriously,” the statement reads. “At this time, the player has been suspended with a final decision to follow once a full review has been completed of the incident, which includes the use of an external consultant in investigating this matter.”

The league said it will not comment until the review is completed.

Friday said he hopes Georgiev receives the proper suspension for the incident but also hopes he gets the proper resources to help him understand Indigenous culture.

"I hope (the MJHL) have all these resources for their non-Indigenous players," he said. "I think to include all of these Indigenous resources would definitely go a long way. It would be a start."

The Kings also released a statement on Twitter regarding the suspension and investigation.

“Our club is committed to being a first-class organization. We take pride in bringing these players into our community and we all must remember that these are young men who are still learning,” the statement reads. “This is a learning opportunity for our hockey club and we are determined to work together to educate all involved.”