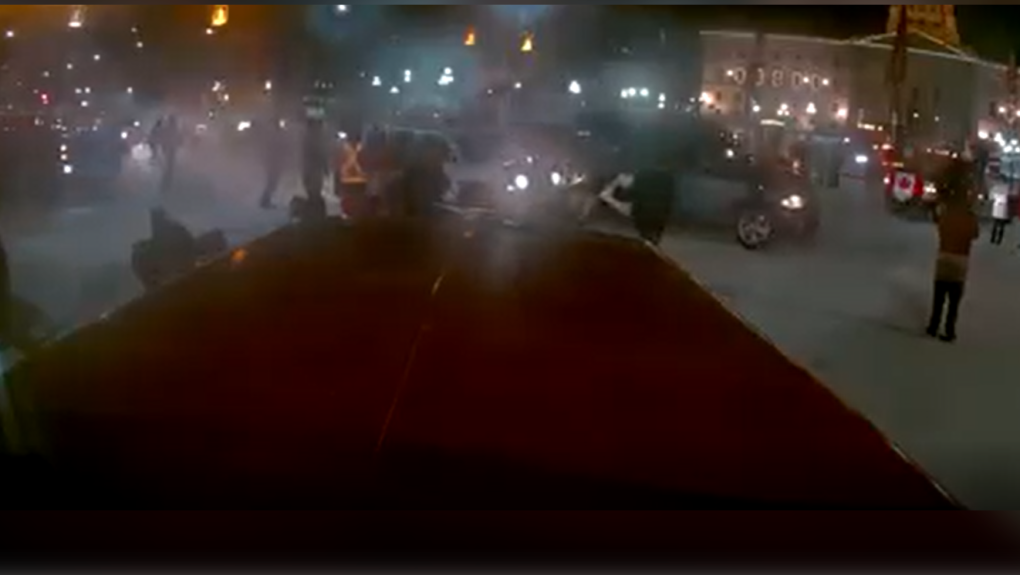 A hit and run incident at a rally outside of the Manitoba Legislature on Friday, Feb 4, 2022. (Source: Facebook)

A 42-year-old man from Headingley, Man., is facing 11 charges in connection with a hit-and-run that injured four people outside the Manitoba Legislature.

The charges against him have not been proven in court. Police said he remains in custody.

The charges come after four people were injured during the Freedom Convoy rally outside the Manitoba Legislative Building Friday evening.

Police previously said around 9:50 p.m. officers got a report that a Jeep Patriot had driven through a group of protesters, hitting four people, before driving off.

Officers later stopped the vehicle and arrested a man "after a brief struggle," police said.

Three of the adults hit by the vehicle had minor injuries but did not need medical attention, the fourth person was taken to hospital but has since been released.

RCMP's use of spyware tools under scrutiny at parliamentary committee

Canada's privacy commissioner says the belated disclosure that RCMP has for years been using spyware capable of accessing cell phone and computer microphones, cameras and other data as part of major investigations, is a clear example of why Canada's Privacy Act needs updating.

Saskatoon woman who had been reported missing facing charges in U.S., Canada

EXPLAINED | What is a 'zombie fire?' Experts describe the cause and concerns

Authorities in the Northwest Territories are monitoring a large 'zombie fire' that flared back up following last wildfire season after smouldering underground during the winter months.

No damage reported after 4.6 magnitude earthquake off Vancouver Island

A 4.6 magnitude earthquake has struck off the coast of Vancouver Island.

Housing correction in Toronto could end up becoming 'one of the deepest of the past half a century,' RBC warns

A housing correction which has already led to four consecutive months of price declines in the previously overheated Greater Toronto Area market could end up becoming 'one of the deepest of the past half a century,' a new report from RBC warns.

The white father and son convicted of murder in Ahmaud Arbery's fatal shooting after they chased the 25-year-old Black man through a Georgia neighbourhood were sentenced Monday to life in prison for committing a federal hate crime.

For millennial and gen Z Canadians, owning a home in this real estate market might seem like a pipe dream. In an exclusive column for CTVNews,ca personal finance contributor Christopher Liew offers some strategies to consider if you can’t afford the housing market yet.