Maxime Bernier, leader of the People's Party of Canada, left Manitoba for Montreal on Saturday morning following his arrest Friday afternoon for allegedly violating public health orders, according to a release by the People’s Party of Canada.

The party said he took a 9:45 a.m. flight after being detained in a St-Pierre-Jolys RCMP detachment for eight hours, paying a cash bail of $1,000 and promising not to break any Manitoban laws.

“I knew I risked being arrested in Manitoba after the threatening letter I got from the province’s public health official,” said Bernier in a release. “But it’s still always a shock when it happens, when the police treat you like a criminal and handcuff you because you dared talk to a dozen people outdoors in a small village half an hour before.”

His departure forced the cancellation of the remainder of his “Mad Max Manitoba Tour,” which had gatherings scheduled through the weekend, including one in Winnipeg.

Bernier has a Manitoba court appearance scheduled for July 27, according to the release.

The Justice Centre for Constitutional Freedoms, which is representing Bernier, confirmed he had been released Friday evening following a bail hearing in a Manitoba court.

"Mr. Bernier knew the health orders and has already received a ticket," RCMP said in an email to CTV News. "The continuation of the offence of violating the current public health orders in Manitoba has resulted in his arrest."

RCMP said he was charged with contravening a provision of the Public Health Act for assembling in a gathering at an outdoor public place and also for failing to self-isolate when coming to Manitoba.

"Manitoba Justice thanks the RCMP for their continued partnership in keeping Manitobans safe at this critical time," a spokesperson for Manitoba Justice said in an email to CTV News.

"Manitobans are reminded that enforcement officials continue to investigate all large gatherings and rallies they are made aware of."

RALLY GOES ON DESPITE BERNIER'S ARREST

Despite Bernier’s arrest, a rally that he was scheduled to speak at, is going forward in Winkler.

Over 100 people showed up to what was supposed to be Bernier’s last stop Friday evening as part of his Mad Max Manitoba Tour. 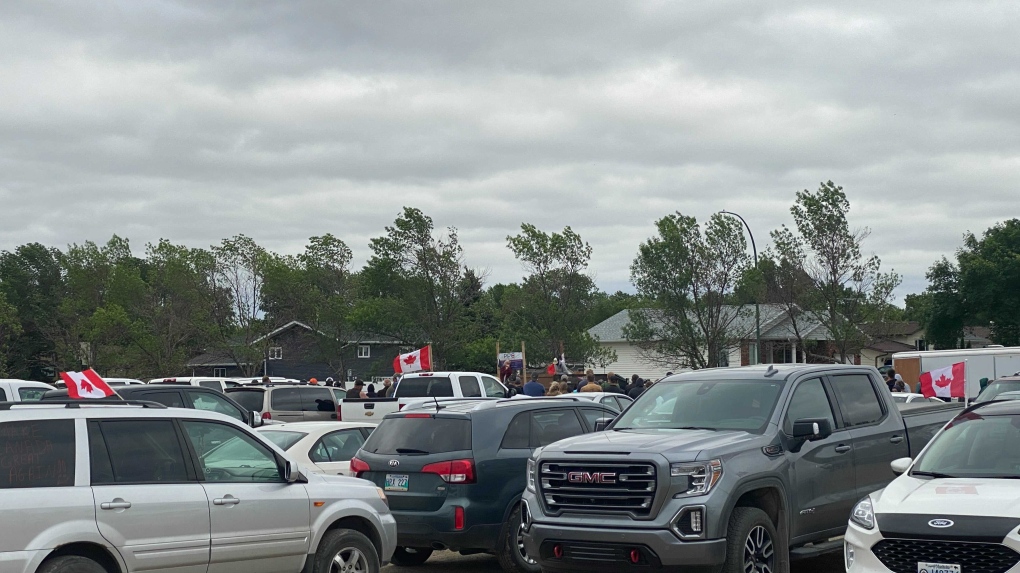 Angela Krahn, a resident of Winkler, said this was the first rally she has attended in the province. She said she wants Manitoba to thrive.

“I think that people have every right to breathe free air,” said Krahn, who added she does not think a rally will prevent the economy from reopening.

Krahn said she is upset that Bernier wasn’t able to attend the rally as planned due to his arrest.

“I think if you are in a free country, which I thought we were, you should be able to speak on what you believe and what you feel is right," she said. "I think that is a right, that’s fundamental and if we aren’t able to do that, how free are we?”

Winkler resident John Sudermen was walking by the rally after receiving his second dose of the vaccine. He said he wanted to voice his frustration about the rally and Bernier who was originally scheduled to attend.

“I think it is rather irresponsible of a federal leader to try to mislead people going down a path that will – that will possibly cause them to die,” said Sudermen.

He said the rally being held in Winkler paints the town in a bad light and makes it seem like its residents aren’t caring people.

“That’s extremely offensive to me because most of the people I know, they are vaccinated.”