'Putting them in internment camps is wrong': new memorial marks 'March to Emerson'

'Putting them in internment camps is wrong': new memorial marks 'March to Emerson' 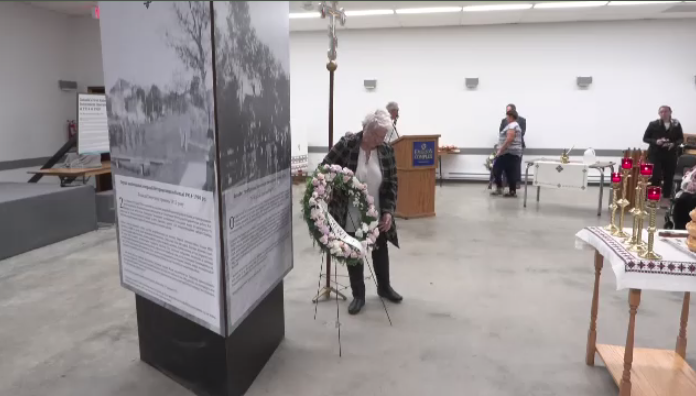 A new exhibit in Emerson is marking a dark period in both Manitoba and Canada's history.

In May of 1915, close to 1,000 men left Winnipeg to walk south, looking for work in the United States. Only 200 of them made it to Emerson, but they were not allowed to cross the border according to Borys Sydoruk, Chairman of the Ukrainian-Canadian Civil Liberties Foundation.

"They were promptly arrested as enemy aliens, they stayed several days here in Emerson until transportation was acquired, and they were sent to Brandon, to the Brandon internment camp."

Sydoruk says those arrested during the "March to Emerson" were among more than 8-thousand people interned at 24 camps across Canada between 1914 and 1920. 80,000 others were forced to check in regularly with authorities.

The affected communities were considered minorities at the time, and included Ukrainians, Germans, Jews, Italians, and civilians from several eastern European countries.

"These men, women, and children were interned, arrested, not because of anything they did," said Sydoruk. "It's who they were, where they were born. Rounding people up and putting them in internment camps is wrong."

The permanent exhibit features a photographic monument along with an interpretive panel. The memorial will be installed at Emerson Corner Park next week.