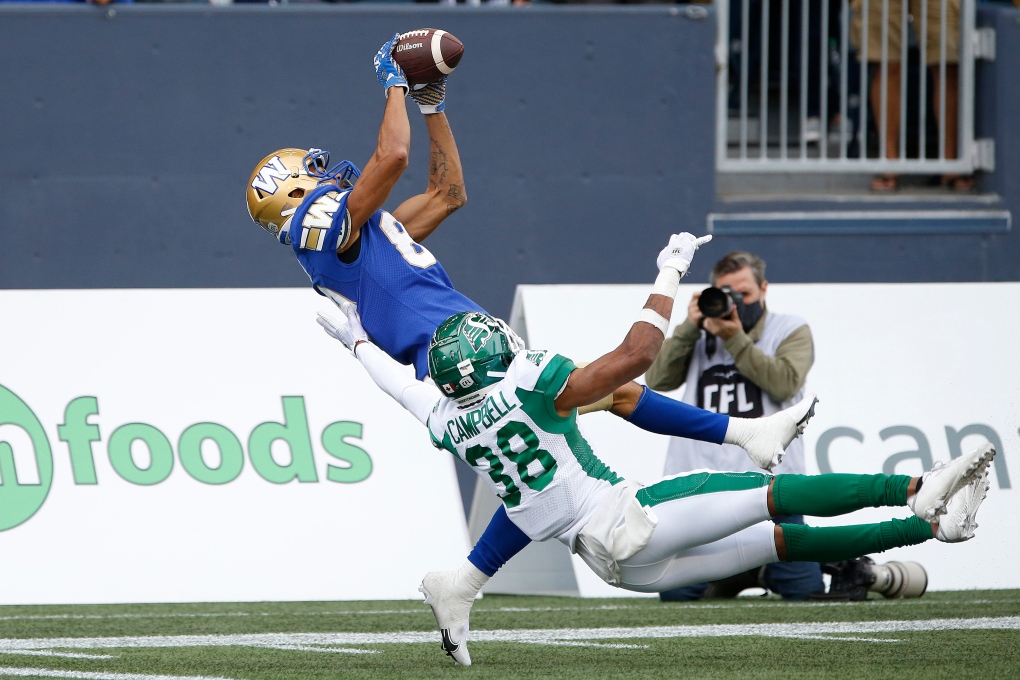 The Winnipeg Blue Bombers will host Saskatchewan in the West Division final. Not only should the defending Grey Cup champions be well rested, but they were a perfect 7-0 this season at IG Field, having outscored opponents 196-62.

And while the Riders were 4-3 away from Mosaic Stadium and 5-4 within the West Division, they lost both regular-season meetings with Winnipeg.

Fajardo had difficulties facing Winnipeg's stingy defence. While he completed 34-of-56 passes for 380 yards, he had no TD tosses and was intercepted four times.

That's hardly surprising given Winnipeg led the CFL in most defensive categories, including fewest offensive points allowed (12.9 per game), net offensive yards (281.3) and most turnovers forced (38). The Bombers also finished tied with Hamilton for fewest turnovers made (20).

Fajardo is coming off a less than stellar performance in the West Division semifinal. He was 22-of-33 passing for 189 yard and a TD but also threw four interceptions in the Riders' 33-30 overtime win over Calgary.

Bombers quarterback Zach Collaros was efficient against Saskatchewan. The West Division's outstanding player was a tidy 37-of-49 passing (83 per cent) for 523 yards with three TDs and an interception in the regular-season series.

And running back Andrew Harris, who this week resumed practising with Winnipeg, ran for 175 yards on 36 carries (4.9-yard average) against Saskatchewan.

But it's a burly offensive line anchored by tackles Stanley Bryant and Jermarcus Hardrick that makes Winnipeg's offence go. Riders defensive lineman A.C. Leonard (11) and Jonathan Woodward (10) finished first and second, respectively in CFL sacks this year but neither had one versus Winnipeg.

The Riders were close in both regular-season games against Winnipeg, but the Blue Bombers outscored Saskatchewan a combined 37-0 in the second half.

Winnipeg also held a significant edge in second-down conversions (51 per cent to 39) and were plus-five in turnovers forced (7-2). The Bombers defence didn't allow the Riders to mount an offensive touchdown drive (0-for-27) while scoring eight times on 27 possessions (30 per cent) with the ball.

At Toronto, the Argos will have history on their side as the home team has won the East final the last six years and 10 of the last 12. The Double Blue were also 6-1 this season at BMO Field, the lone blemish being a 13-7 loss to Edmonton on Nov. 16 that had no bearing on the standings.

Toronto also won three of the four regular-season games between the two teams. Hamilton won the first meeting 32-19 on Labour Day at Tim Hortons Field before the Argos claimed the next three (two at BMO Field).

Toronto has won six of its last eight games but hasn't played since the loss to Edmonton. Hamilton is coming off a 23-12 home victory over Montreal on Sunday in the East Division semifinal, a game that saw its defence register six sacks and five turnovers.

But there's uncertainty regarding the status of Toronto starter McLeod Bethel-Thompson.

The Argos held Bethel-Thompson out of practice and sent him home Friday after he attended the Toronto Raptors' 97-93 home win over the Milwaukee Bucks on Thursday night. Bethel-Thompson's appearance violated the CFL's COVID-19 protocol, which prohibits players from attending large sporting events.

That normally would've meant Bethel-Thompson having to quarantine for four days and provide two negative tests before being able to resume team activities. But the CFL said Friday that Bethel-Thompson will be allowed to play Sunday if he produced negative PCR tests Friday and Saturday as well as a negative Rapid Antigen Test on Sunday following a 48-hour quarantine at his residence.

Toronto players Dexter McCoil, Charleston Hughes, Llevi Noel and Jeff Richards also attended the basketball game and were sent home by the team Friday. They'll be subject to the same requirements as Bethel-Thompson in order to suit up Sunday.

If Bethel-Thompson can't play Sunday, veteran Antonio Pipkin will line up under centre. Pipkin started Toronto's season-ending 13-7 loss to Edmonton on Nov. 16 and also has previous starting experience with the Montreal Alouettes.

Bethel-Thompson completed 63-of-88 passes (71.6 per cent) for 825 yards with three TDs and three interceptions versus Hamilton. Canadian Kurleigh Gittens Jr. (23 catches, 303 yards, TD) and DaVaris Daniels (15 receptions, 177 yards) have been the Argos leading receivers versus the Ticats.

If Bethel-Thompson plays Sunday, it will be his CFL playoff start. Since 2010, quarterbacks are 14-14 when making their post-season debuts.

This will mark the fifth time since 1998 that Toronto has hosted the East final, but Toronto is just 1-3 in those games. And the Argos haven't defeated Hamilton at home in the conference championship since 1983.

Hamilton's Jeremiah Masoli will make his sixth career playoff start (3-2) and twice has thrown for 300-plus yards in the playoffs. Masoli is 6-3 all-time versus Toronto and made his first CFL post-season start against the Argos in 2015.

But Toronto's defence has recorded 11 sacks this season versus Hamilton, with Shawn Oakman (four) leading the way. The Ticats have registered seven sacks, led by Ja'Gared Davis (three) and Dylan Wynn (two).

The Ticats also led the turnover battle (six to four), but the Argos held the ball longer on average (32 minutes, 20 seconds).

If the game comes down to a last-minute field goal, Toronto's Boris Bede has made all 13 kicks he's attempted in his last three games. Bede has made six field goals from 50-plus yards this season.

Michael Domagala has made six-of-seven attempted field goals in Hamilton's last two games, but none have come from beyond 38 yards.