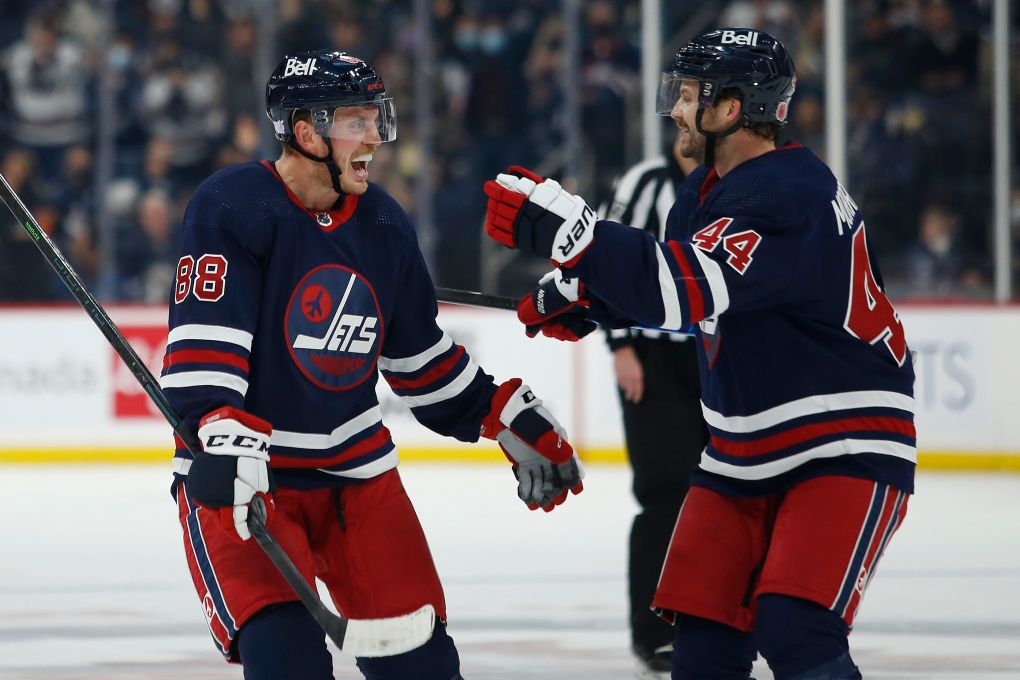 WINNIPEG -- Nate Schmidt's first goal as a Winnipeg Jet proved to be the game-winner in a 4-1 victory over the San Jose Sharks on Thursday.

Acquired in an off-season trade with Vancouver, the defenceman blasted a one-timer from the point past a screened James Reimer at 14:11 of the second period to make it 2-1 for the Jets.

Pierre-Luc Dubois had a goal and assist and Kyle Connor and Jansen Harkins also scored for Winnipeg (7-3-3). Andrew Copp added a pair of assists.

Connor Hellebuyck made 27 saves for the Jets, who were playing their fifth game of a season-long, seven-game homestand (3-1-1) at Canada Life Centre.

San Jose had seven players and head coach Bob Boughner miss the game because they're in the NHL's COVID-19 protocol. They're expected to re-join the team prior to Saturday's road game in Colorado.

John MacLean was in charge of the bench in Boughner's absence.

A Winnipeg turnover in the defensive zone led to Cogliano's goal at 6:28 of the opening period. Brent Burns picked up the assist, extending his point streak to six games (one goal, eight assists).

Connor evened the score at 11:38 when he flipped a rebound past Reimer for his team-leading 10 goal of the season.

The second period featured a number of missed opportunities for both sides. Jets captain Blake Wheeler was stopped by Reimer on a breakaway and a two-on-one break.

San Jose forward Rudolfs Balcers hit a post early in the period, and the Sharks were denied on a three-on-one break.

Five minutes after Schmidt's goal, Harkins widened the gap to 3-1 on a two-on-one play with Adam Lowry.

The Jets had their third power play of the game 16 seconds into the third period when Nick Bonino was called for tripping, but they only managed two shots on net.

Dubois scored his goal into an empty net with 33 seconds remaining in the game.

It was the last meeting of the season between the Jets and Sharks. San Jose won both games in California last month, one in regulation and one in overtime.

This report by The Canadian Press was first published Nov. 11, 2021.