Weather warnings remain across much of the province as a storm continues to pelt Manitoba with snow and rain, flooding city streets and forcing closures.

The rainfall warning in the City of Winnipeg continues, with Environment Canada saying significant rain could reach 30 to 60 mm in total for southern Manitoba.

The rainfall in Winnipeg led to several roads closed due to flooding.

Among those areas was the Osborne Street underpass which flooded Saturday night. Other places such as McPhillips Street and Logan Avenue, and Higgins Avenue in Point Douglas were also flooded.

The city said as of Sunday morning, the underpasses were open, but is warning drivers to be careful as there is still flooding in many places. Drivers should not speed through bodies of standing water, the city said.

The flooding also led to a collapsed roadway on Route 90 in Winnipeg between Dublin Avenue and Notre Dame Avenue Saturday evening. It was partially reopened in the early-morning hours of Sunday.

The Winnipeg Police Service is reminding the public that the use of roadways/underpasses may be limited due to flooding. We are advising the public to contact our Communication Centre only in the event of emergencies. Any other inquiries may be directed to 311.

To deal with water levels in the city, the province reactivated the Red River Floodway on Saturday. As of Sunday morning, the Red River levels was at 17.25 feet at James Avenue – a slight drop since Saturday evening when the levels were at 18.00 feet.

OUTSIDE THE CITY, RESIDENTS GEAR UP FOR FLOODING

Winnipeg is one of several areas in southern and central Manitoba that remains under Environment Canada warnings as of Sunday morning.

In the RM of Stanley (which was under a rainfall warning as of Sunday morning), officials are warning there is major flooding across the municipality.

Residents are able to pick up sandbags at the RM Public Works Shop on Road 25W, just south of Greenvalley Equipment.

The City of Winkler said its sewer systems have been overwhelmed by the rainfall. The city is asking its residents to minimize water usage to reduce strain on the systems.

"Any water used in your homes will add further strain to the system and could cause backup," the city said in a post on Facebook.

The storm has also led to power outages in many areas in Manitoba.

On Sunday morning, Manitoba Hydro said wind and icing has led to outages and poor driving conditions. It shared a picture of one hydro pole that had been snapped in half. 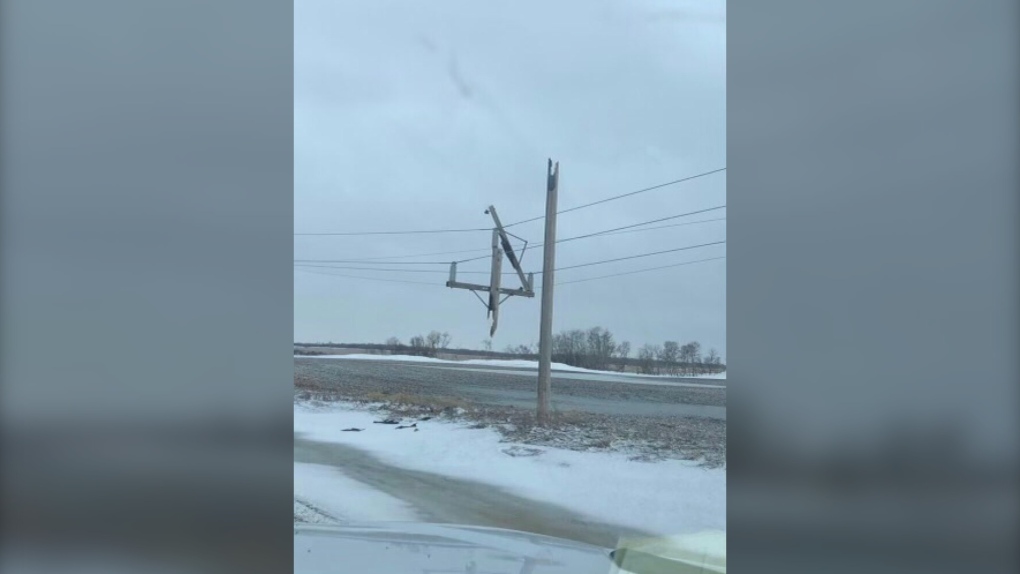 "We’re working as quickly and safely as possible under the circumstances. Crews have to use the same roads as everyone else, so any shutdowns or unsafe driving conditions will cause delays to our outage response," Manitoba Hydro said in a tweet Sunday morning.

In preparation for the storm, Manitoba Hydro opened an Emergency Operations Centre in Brandon to coordinate a response.