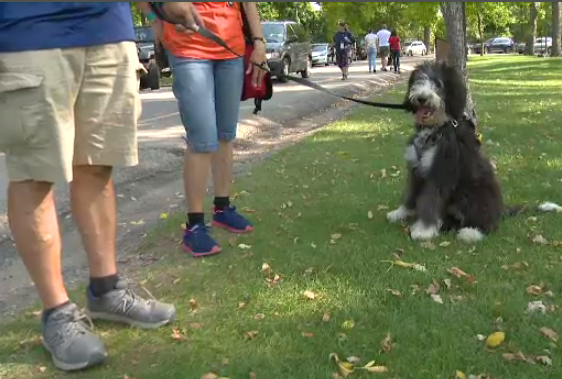 A couple hundred dogs led their owners through Winnipeg’s Kildonan Park on Sunday afternoon for the fourth annual ‘Paws for a Cause Cancer Walk.’

The Never Alone Cancer Foundation organized the event in memory of a Winnipeg man named Jerry Maslowsky. He died from esophageal cancer in 2016.

That experience, Schiefer said, inspired Never Alone and Maslowsky’s family to create an inclusive event in his memory.

“Families and caregivers are often forgotten in the cancer battle,” Schiefer said. “Our idea is to support the whole because you need a team through that cancer journey.”

‘Paws for a Cause’ participants raised over $105,000 ahead of this year’s walk, which includes $40,000 in matched donations from Kin Canada.

Schiefer said that money will help the approximately 350 callers who reach out to Never Alone each year.

Tobiasz Osicki, a volunteer at Sunday’s event, initially got in touch with Never Alone after being diagnosed with two types of cancer.

“That’s where they stepped up,” Osicki said.

After undergoing a tracheotomy, as well as a procedure to remove his salivary gland, Osicki said Never Alone has helped with everything from transportation to groceries throughout his recovery.

“It’s nice to have a foundation and a group of people that are just there waiting – no questions asked,” Osicki said. “They’re angels without halos.”