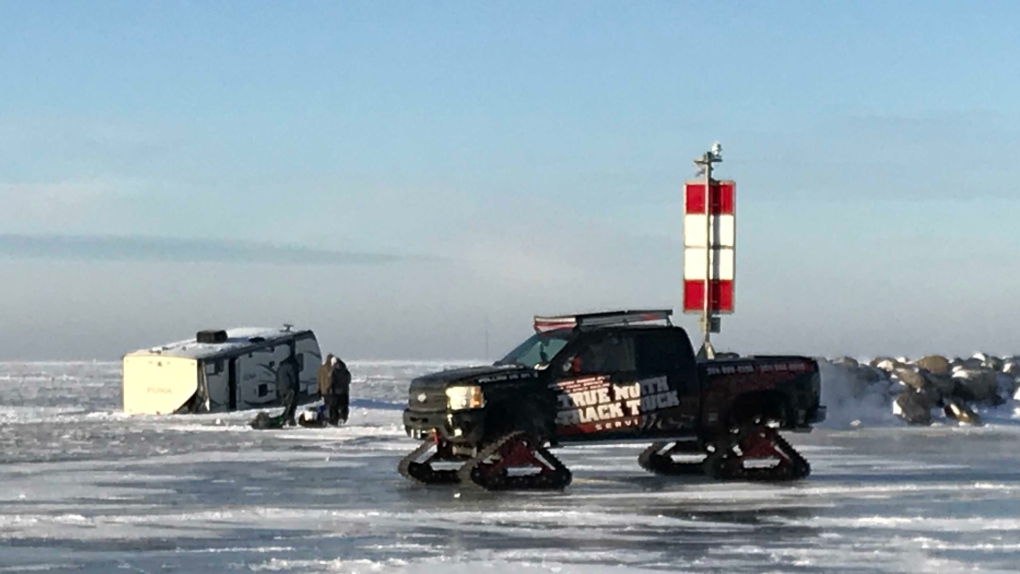 Brandon Friesen, the owner of True North Track Truck — a towing service with a pickup truck outfitted with tracks instead of wheels, was on site Thursday morning scoping out the situation to assist with the recovery. (Source: Josh Crabb/ CTV News Winnipeg)

It happened at Balsam Harbour, a popular ice fishing destination on the east side of the lake, about an hour’s drive north of Winnipeg and just south of Grand Beach. Three other vehicles have already been recovered.

Brandon Friesen, the owner of True North Track Truck — a towing service with a pickup truck outfitted with tracks instead of wheels, was on site Thursday morning scoping out the situation to assist with the recovery. He said his off-road vehicle is specially built for emergency rescues, off-road towing and ice-shack hauling.

By late morning a crew of four people from Dr. Hook showed up start the recovery operation with a flatbed truck and two off-road vehicles of their own.

A handful of spectators were parked on shore watching the recovery effort.

Jeff Erhardt was one of them. He said he took his truck on the ice before the five vehicles broke through Sunday.

Erhardt hopes the situation will bring the issue of ice safety to the forefront.

“Where that trailer has gone through on Sunday is the corner that I drove through Thursday afternoon — the same exact spot. Yeah. It could’ve been me,” said Erhardt. “It’s not safe. You can fish one spot it’s 12 inches and 20 feet over it’s six inches. Take your chances.”

Both the R.M. of St. Clements and the Lifesaving Society of Manitoba have issued warnings about dangerous ice conditions in southern Manitoba.

Friesen said on Sunday a pickup truck pulling the camper trailer was the first to go through the ice. As he was attempting to tow the unit he said other vehicles which were returning to shore following a day of ice fishing ended up breaking through.

Friesen said three people were in the pickup truck, which remains frozen in the ice, when it broke through and are lucky to be alive.

East Beaches fire chief Mark Sinclair was also on site Sunday with the fire department. He thinks more education is needed for people who spend time on the ice.

He said his department responds to a few ice rescues every winter.