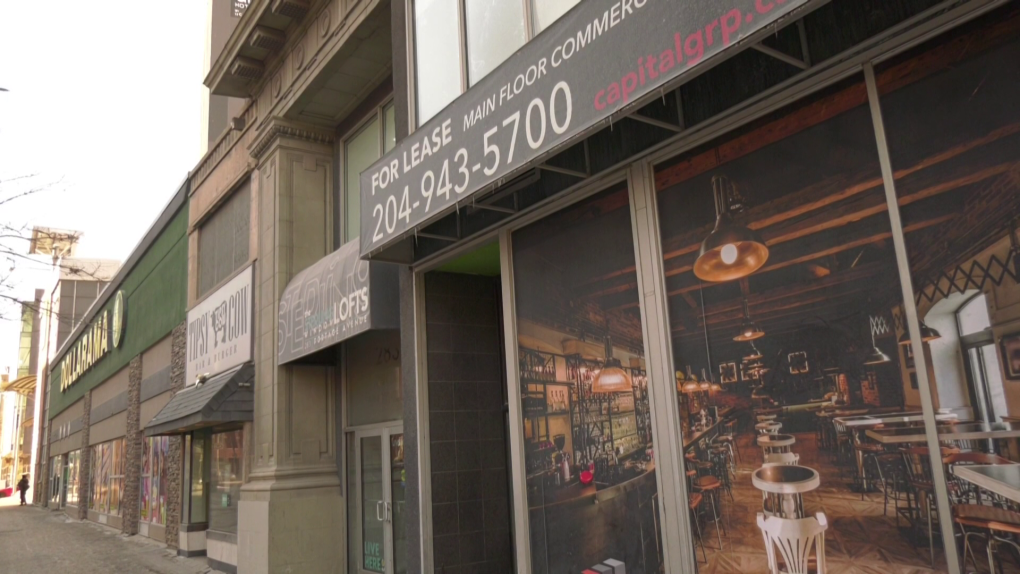 A for-lease sign is pictured on a business on Portage Avenue in Downtown Winnipeg on Feb. 17, 2021. (CTV News Photo Ken Gabel)

Now, a new report by several business groups with a stake in the future of Downtown Winnipeg details exactly what the loss of that daily infusion of workers, diners, coffee-drinkers and salon-goers did to local businesses.

“We watched our downtown streets empty and the density and vibrancy we’re used to still hasn’t returned,” said Downtown BIZ CEO Kate Fenske in a news release accompanying the report’s release on Wednesday.

“This report confirms the struggles business owners have been experiencing and now we have the data that shows us how devastating the revenue and job losses really are.”

Downtown Winnipeg BIZ was one of five groups involved in preparing the report, along with the Exchange District BIZ, West End BIZ, Tourism Winnipeg, and CentreVenture Development Corp. The City of Winnipeg provided support and guidance as well.

The report paints a striking picture of the pandemic’s impact, and adds context to a Downtown landscape dotted with many more empty storefronts than would have been seen just 18 months ago.

The report shows that Downtown storefront businesses (including restaurants and personal services) lost an average of $2 million a week in gross revenue since the pandemic began, an estimated $139 million in total revenue loss over a 15-month period.

However, it’s not just businesses that were severely impacted, key industries downtown that drive the province’s economy will be slow to recover.

“Tourism, arts, entertainment and hospitality came to a grinding halt and that meant the dollars stopped coming,” said Natalie Thiesen, who is the vice president of tourism for Economic Development Winnipeg.

“The cancellation of planned in-person conferences that Tourism Winnipeg generated resulted in the loss of at least 56,000 people coming downtown and more than $59 million in direct expenditures in our city.”

The report’s creation is an early step toward developing a recovery strategy for Downtown. The goal is to have that strategy prepared for release this fall. In the meantime, the partnering groups are seeking input by having anyone interested in the future viability of Downtown Winnipeg to take its Downtown recovery survey.

The report also includes a section of actions citizens, businesses and governments may take to help speed the recovery along until the more comprehensive strategy is unveiled.