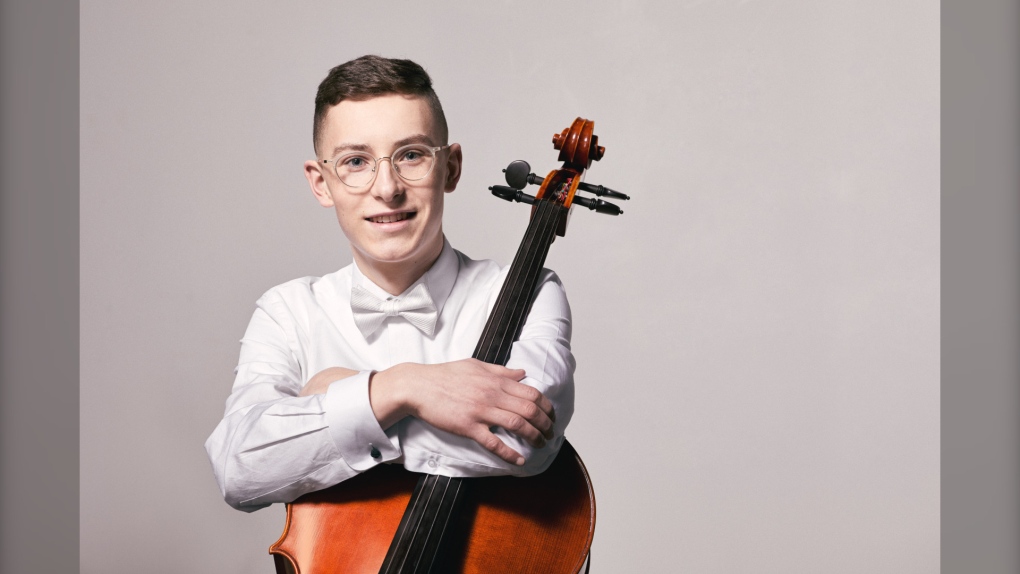 A 21-year-old Winnipegger is the proud recipient of this year’s Canada Council for the Arts Michael Measures First Prize, a prestigious award for young Canadian classical music performers.

Cellist David Liam Roberts was named the first prize winner of $25,000 at a virtual ceremony Wednesday. To be eligible, entrants must be music performers between 16 and 24 years old who are enrolled in a summer training program with the National Youth Orchestra of Canada.

“I’ve been gunning for this award for a few years,” Roberts told CTV News.

His resume tells a similar tale; Roberts was the 2020 recipient of the Michael Measures Second Prize, the 2019 winner of the Gail Asper Foundation Award of Excellence and the 2018 recipient of the WMC McLellan Competition second prize.

“Obviously, the National Youth Orchestra of Canada has a reputation of being a great training program for orchestral musicians,” he said. “It really is an honour.”

Roberts, who is Métis, was able to continue performing in a mix of taped and in-person performances this summer, including in Italy, Slovenia and to hometown audiences with the Winnipeg Symphony Orchestra alongside his former teacher, principal cellist Yuri Hooker.

“One of my goals in the next few years is really just building my profile internationally. My summer was my first set in that direction,” he said.

Next up -- Roberts is about to enter his final year at the Glenn Gould School of the Royal Conservatory of Music in Toronto. The prize money will come in handy as he opens the next chapter of his professional career.

“I’m going to use it definitely for my career development and my studies in the next few years,” he said. “I’m planning to do graduate studies either in the States or Europe, so obviously just travelling, auditioning, studying - all these things that are stepping stones that all cost a lot of money, and it’s prohibitive. So for me, this award makes a lot of my dreams and goals a lot more possible.”

Rescuers raced Tuesday to find survivors in the rubble of thousands of buildings brought down by a 7.8 magnitude earthquake and multiple aftershocks that struck eastern Turkiye and neighboring Syria, with the discovery of more bodies raising the death toll to more than 5,000.

Will Biden's second state of the union mark a less protectionist approach to Canada?

A new poll suggests a majority of Canadians still see the United States as their country's closest ally, even in an age of isolationism and protectionist policies.

China said Tuesday it will 'resolutely safeguard its legitimate rights and interests' over the shooting down of a suspected Chinese spy balloon by the United States, as relations between the two countries deteriorate further. The balloon prompted U.S. Secretary of State Antony Blinken to cancel a highly-anticipated visit to Beijing this week that had offered slight hopes for an improvement in relations.

Mendicino: foreign-agent registry would need equity lens, could be part of 'tool box'

Public Safety Minister Marco Mendicino says a registry to track foreign agents operating in Canada can only be implemented in lockstep with diverse communities.

Vaccine intake higher among people who knew someone who died of COVID-19: U.S. survey

A U.S. survey found that people who had a personal connection to someone who became ill or died of COVID-19 were more likely to have received at least one shot of the vaccine compared to those who didn’t have any loved ones who had been impacted by the disease.

The chances Trudeau's health-care summit with the premiers will end with the blueprint to realistic long-term improvements are only marginally better than believing China’s balloon was simply collecting atmospheric temperatures, Don Martin writes in an exclusive column for CTVNews.ca, 'But it’s clearly time the 50-year-old dream of medicare as a Canadian birthright stopped being such a nightmare for so many patients.'