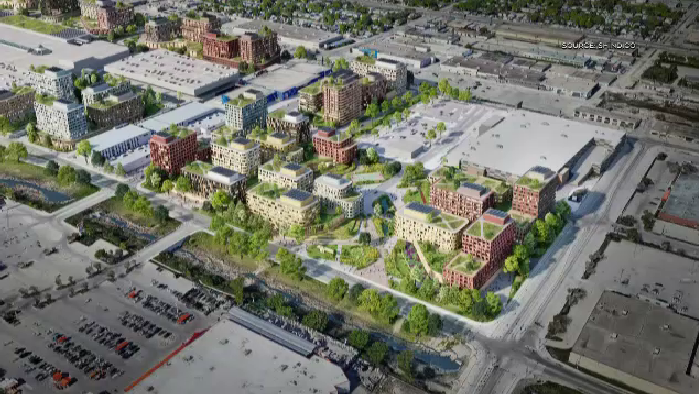 The development would see multiple buildings, parks, and bike paths built on the empty lots at the old football stadium site and in the mall parking lot. (Source: Shindico)

A billion dollar development set for Polo Park is a long time coming, according to one expert.

The project is now moving forward after being held up because of concerns from the Winnipeg Airports Authority (WAA) about noise complaints, which could stall its 24 hour operations.

University of Winnipeg urban studies professor Jino Distasio said the 4,000 apartments planned for the Polo Park area would transform the neighbourhood. "For Winnipeg airport's 24-hour presence which is critical for cargo and the movement of people, that's where the design side of things is going to have to come into play," he said.

Distasio added the development could impact other areas of the city too.

In 2021, the airport vicinity regulation was changed, paving the way for the billion-dollar development from CF Polo Park's owner Cadillac Fairview and developer Shindico.

It would see multiple buildings, parks, and bike paths built on the empty lots at the old football stadium site and in the mall parking lot.

The WAA is not opposed to the new development yet, "We are comfortable with the current regulation as it strikes a balance between development and airport operations. Until we see the developer's plan we aren’t in a position to comment on specifics,” said the WAA in a statement to CTV News.

Justin Zarnowski with Shindico said the apartment buildings will not only be environmentally sound, they will also block noise. "These buildings that are energy efficient don't let air out cause that's how you lose the heat," he said. "And by not letting air out you're not letting noise in."

Airport aside, Distasio said a traffic study will be key to ensure an anticipated increase in vehicles - including commercial truck traffic - can flow through the area, "It's a pretty serious move for that part of Winnipeg," he said.

He added the new housing at Polo Park could take away from plans to get more people living downtown. "There's no doubt about it, this project sends volley over to downtown stay on your toes because we're coming after your bread and butter," said Distasio.

Shindico is targeting April to begin the approvals process at city hall for the development.