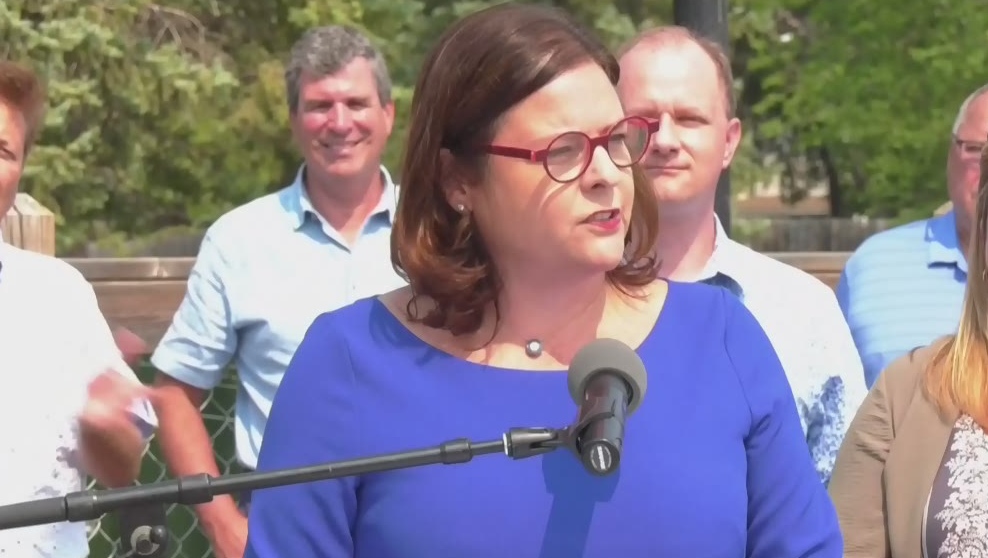 Heather Stefanson's bid to lead the Manitoba Progressive Conservatives and take the premier's chair follows a lifetime in and around politics that started as a young girl.

She is the establishment candidate in the contest to replace former premier Brian Pallister, who stepped down from the top job last month. She is backed by most of her caucus colleagues and has experience in key cabinet portfolios.

She is also in the position of having to distance herself from her own party's decisions and explain why the COVID-19 pandemic hit Manitoba especially hard during her brief time as health minister.

"Have we always gotten it right? No," she said in a recent interview.

"And I think when we don't get it right, it's time to take a step back and say, 'You know, wait a minute. We've got to be out listening to Manitobans."'

Party members are to decide between Stefanson and former Manitoba MP Shelly Glover on Oct. 30.

Stefanson, 51, was seven years old when she got her first taste of politics. Her father ran for a seat in the legislature, finishing second to Liberal Lloyd Axworthy.

She studied political science at university and later worked for Mila Mulroney when Brian Mulroney was prime minister.

"It was really an opportunity to learn how government works and functions, because we were dealing with all the different government departments on the correspondence side of things," she recalled.

While in Ottawa, Stefanson met her future husband, Jason, a nephew of a former Manitoba cabinet minister.

She worked for the federal agriculture minister and, after the Tories lost the 1993 federal election, became an investment adviser. She was suspended at one point when she was found to have made trades during a period in which she had not kept up her credentials.

Stefanson was on then-premier Gary Filmon's constituency executive when the provincial Tories lost in 1999. Filmon stepped down the following year. Stefanson ran for his seat and won. She has held the Tuxedo constituency in Winnipeg ever since.

After years in opposition, the Tories under Pallister won a big majority in 2016. Since then, Stefanson has served in several roles, including deputy premier, health minister, justice minister and minister of families.

Her brief time in the health portfolio coincided with Manitoba's worst days of the COVID-19 pandemic.

The government did not heed pleas from some doctors to impose tighter public health restrictions as the third wave started last spring. Intensive care units soon became so overtaxed, dozens of patients had to be flown to other provinces for care. Some died there.

When asked how she would avoid a similar situation as premier, Stefanson pointed to ongoing efforts to expand intensive care capacity and a recent collective agreement signed with the Manitoba Nurses' Union.

"That will help towards the recruitment and retention of nurses."

Stefanson, without mentioning Pallister by name, is also promising a government that would listen and collaborate more. The day she launched her leadership bid, she promised to scrap legislation that would eliminate elected school boards. The bill, staunchly defended by Pallister, had run into widespread opposition. It was withdrawn by interim Tory leader and Premier Kelvin Goertzen earlier this month.

She believes the Tories, low in opinion polls, can rebound in time for the 2023 election.

"I'll spend my time listening and working with Manitobans," she said. "If we're listening to Manitobans and we're moving in a direction they want, it should be winnable again."

Stefanson had been touted as a possible leadership candidate in previous races, but she said she did not jump in because her children were young. They are now grown and Stefanson feels good about saying yes to people who asked her to run this time.

"Was I necessarily looking for this? Not really. But the opportunity sort of presented itself ... and I had many of my colleagues coming and asking me if I would consider doing it. So I took some time with family and made that final decision."