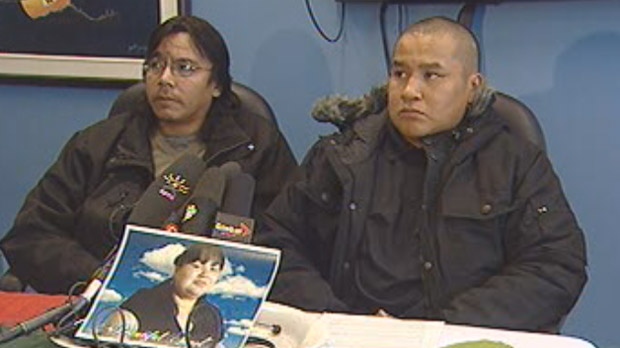 Tracy Okemow's family held a press conference on Dec. 13, 2012 in Winnipeg after she died in November.

WINNIPEG -- Relatives of a northern Manitoba woman who died after being picked up for intoxication are blaming the RCMP and nursing station staff for her death.

"My sister called for help and the RCMP ignored her," Ralph Okemow said Thursday as he sat with aboriginal leaders.

"They should have taken Tracy to the nursing station again. Maybe my sister would be alive today."

Tracy Okemow, 31, was taken from her home on the God's Lake First Nation by police on Nov. 28. According to an RCMP press release at the time, which did not identify anyone by name, officers had received a call about a woman in medical distress. They took her to the nursing station, then to a holding cell.

The next day, RCMP said, she complained about not feeling well. She was taken back to the nursing station and then flown to a Winnipeg hospital where she later died.

Okemow's family, however, say Tracy had complained throughout the night about abdominal pain and shortness of breath, but she was ignored by guards.

"They were saying, 'Come on Tracy, we know you're just faking,"' Ralph Okemow said.

By the time morning came, Tracy's condition had worsened to the point where little could be done to help her, he said, and her heart had stopped on five occasions.

RCMP say an autopsy was completed and they are awaiting a toxicology report before determining a cause of death. There were no indications of foul play, police said.

Family members and community leaders say they got their information from interviews with two men who were in nearby cells.

RCMP announced a review of the matter earlier this month that will be observed by a member of the First Nation and reviewed by the Brandon Police Service.

"We recognize and understand that the death of a loved one deeply affects the family and the community," RCMP Chief Supt. Scott Kolody said in a written statement Thursday.

"As this is an ongoing investigation, no further information can be released."

Okemow's family, along with leaders of the Manitoba Keewatinowi Okimakanak, which represents 30 First Nation communities in northern Manitoba, said the officers who dealt with Okemow should be suspended and taken out of the community.

"She was tormented ... she was caged," said MKO Grand Chief David Harper.

"The lack of care for an individual who called for help right throughout the night is totally unacceptable."

They also accused the nursing station staff of not realizing the seriousness of Okemow's condition. Health Canada issued a statement Thursday expressing "sincere sympathy to the family of the deceased and to the community".

The nursing station normally has five nurses available for care, as well as one doctor during business hours. It was fully operational at the time of Okemow's death, the department said.