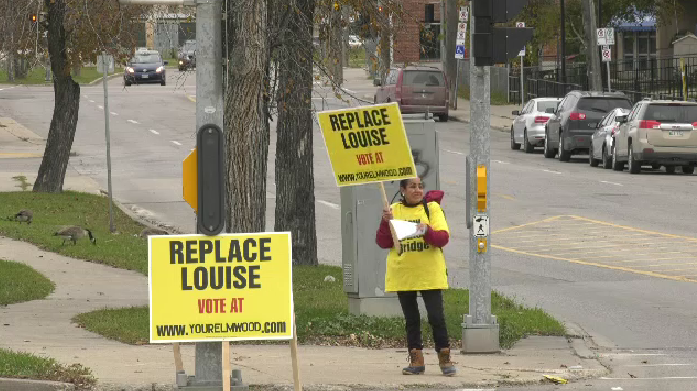 An awareness campaign on the need to replace an aging Winnipeg bridge continues eight years after local two politicians came together to promote the issue.

Jason Schreyer, the city councillor for Elmwood-East Kildonan, and Jim Maloway, the NDP MLA for Elmwood, first put together an information pamphlet on the Louise Bridge and advocated for its replacement in 2014.

On Saturday, Schreyer was back at it, with a new pamphlet but an old message: the need for provincial and federal funding for a Louise Bridge replacement.

He was joined by other concerned citizens near the bridge, handing out information and relaying the importance of one of Winnipeg’s oldest river crossings.

“We’re just reminding all levels of government that this is important,” said Schreyer. “It’s so important that they built this bridge first. That’s how important it is.”

Schreyer said the Louise Bridge, as it stands today, rests on crumbling footings in the Red River and is in need of replacement.

The Louise Bridge replacement has now been tethered to two other city development projects, according to Schreyer, the first being an eastern transit corridor into Transcona with the other being a reconfiguration of local traffic in the area.

“The engineers at city hall knew that we had to deal with the bridge sooner or later but politics can get in the way of engineering and this was deprioritized for a while,” said Schreyer.

“This is not about political priorities, this is about engineering priorities and important infrastructure.”

Now that the bridge project is linked to other city development plans, Schreyer said getting a new bridge is inevitable, but government funding is still needed.

“Regardless of what they do first, whether it’s the transit corridor to Transcona or changing the transportation and street routing here,” sad Schreyer. “First things first you still need a new Louise Bridge and then all can spring from there.”