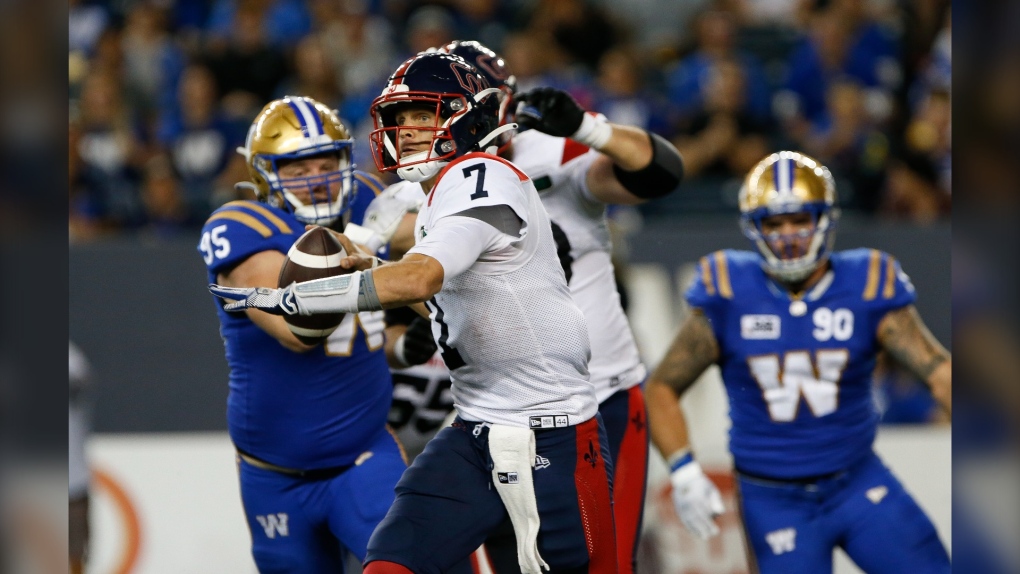 Trevor Harris didn't look too surprised -- or even thrilled -- after the Montreal Alouettes pulled off a huge upset with a 20-17 overtime victory over the previously unbeaten Winnipeg Blue Bombers on Thursday.

"Obviously I know that they're probably kicking themselves, feeling they should have won with that missed (fourth-quarter) field goal late, but we've been there as well, so we feel their pain."

Liegghio's 37-yard field-goal attempt hit the right upright and bounced outward in front of 31,053 stunned fans at IG Field. He also went wide on a 32-yard attempt on the last play of the fourth quarter.

The Bombers' first loss of the season gives them a 9-1 record and stopped them from tying a team record from 1960 for starting a season with 10 straight victories.

The Alouettes bumped their record to 3-6.

After the game, Liegghio gave differing analyses of both misses.

"The one before overtime, I just didn't give myself a chance and it didn't look good coming off my foot," he said. "Then the one at the end there, in overtime, I thought I hit it well. It felt good off my foot but, obviously, the outcome wasn't what I wanted it to be and just move on."

"Better now than later, right? He'll bounce back and be good," said O'Shea, whose team heads into its bye week.

It was a rematch between the clubs, who played in Montreal last week. That game was tied 14-14 heading into the fourth quarter, but Winnipeg notched three straight touchdowns and won 35-20.

"That definitely ranks up there with one of the most wildest, craziest finishes that you're going to come across," he said.

"But what was good was that we happened to be on the right end of it. These are games that, I don't know, maybe a few weeks ago we wouldn't have won."

Both teams were scoreless in the first quarter, then tied 7-7 at halftime and 10-10 after the third quarter.

Bombers running back Brady Oliveira broke the tie with a 19-yard touchdown run at 12:50 of the fourth quarter, capping off a 10-play, 100-yard scoring drive.

Winnipeg looked like it was marching down for another score, but Montreal defensive back Wesley Sutton hit Bombers quarterback Zach Collaros, forcing a fumble and turnover with just under eight minutes left.

The Alouettes used the change of possession to get to Winnipeg's one-yard line. The Bombers' defence rattled off the stops and it looked like a turnover on downs, but Winnipeg was handed an offside penalty and the visitors went back to first down.

Montreal backup quarterback Dominique Davis then pushed in for the one-yard touchdown with 2:21 remaining. Cote was good on his convert for the 17-17 tie.

Oliveira had another run and appeared to fumble the ball, but he was ruled down by contact.

As the clock wound down, Liegghio lined up for a 32-yard field-goal attempt but missed wide left. Alouettes receiver Tyson Philpot ran the ball out of the end zone, sending the game into overtime.

After Cote made his go-ahead field goal, Sutton broke up a pass attempt to Bombers receiver Dalton Schoen, causing Mike O'Shea to throw the challenge flag. It was unsuccessful and Liegghio stepped up and made his ill-fated attempt.

Davis also scored a TD on a three-yard push in the second quarter. Cote made two converts, hitting the upright on a 20-yard field-goal attempt and connecting on a 43-yarder.

Schoen had a 27-yard TD catch for Winnipeg. Liegghio was good on a 44-yard field-goal attempt and made two converts.

This report by The Canadian Press was first published Aug. 11, 2022.

Health Canada says Canadians ages 12 and up can now be given the Pfizer-BioNTech COVID-19 booster vaccine that targets the BA.4 and BA.5 strains of the Omicron variant.

The number of people hospitalized with COVID-19 has reached a two-month high in Ontario, as most public health indicators now point to a fall resurgence of the virus.

An Ottawa police officer pleaded guilty to misconduct for donating money to 'Freedom Convoy' fundraisers during the protest in downtown Ottawa.