A carbon monoxide leak at a Winnipeg hotel sent dozens of people to hospital Tuesday, at least 15 of them in critical condition.

The City of Winnipeg said emergency crews were called to the Super 8 Hotel at 3760 Portage Avenue at 10:19 a.m., when an automatic alarm showed there was carbon monoxide gas.

John Lane, chief of Winnipeg Fire Paramedic Service, said of the 52 occupants of the hotel, including staff and one dog, 46 people were transported to hospital, including two children.

The Winnipeg Regional Health Authority said as of 5:30 p.m. Tuesday, the vast majority of the patients had been discharged.

When the leak was discovered, carbon monoxide levels at the hotel were 385 ppm, and the union for Winnipeg firefighters explained that levels of 12-20 ppm will trigger evacuations.

Carbon monoxide poisoning can cause illness or even death.

Staff among the sick

Super 8 Owner Justin Schinkel told CTV News at least one of the members of his staff was given oxygen.

All of the people affected were taken to different hospitals around the city, while Winnipeg Animal Services was tasked with providing care for the dog.

The Winnipeg Regional Health Authority said the city’s emergency departments were prepared and ready to safely manage the volume of patients.

“We can confirm there have been no fatalities, nor any patients requiring intensive care services,” said a spokesperson in an email to CTV News.

“We continue to monitor the situation closely, but we do not anticipate any further public updates on the health condition of the individual patients.”

Two of the 46 people sent to hospital, Sergiy Bolshakov and Oleg Lugousky, told CTV News they’re from Toronto and in Winnipeg for a business trip.

Both said they had 20 per cent carbon monoxide in their blood.

Bolshakov said he felt dizzy. Lugousky had a sore throat. 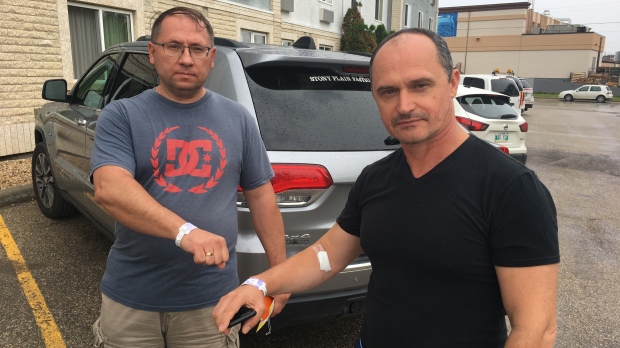 They said they didn’t hear the alarm go off Tuesday morning because they had the television on quite loud. Firefighters knocked on their door to tell them about the leak.

The men said they travelled by ambulance to St. Boniface Hospital where health care staff gave them oxygen from six or seven tanks to make them feel better.

They said they were thankful for all the excellent care they received.

The City of Winnipeg said the building was completely ventilated using powerful fans and carbon monoxide levels had returned to zero ppm within 90 minutes of the arrival of emergency responders.

Lane said the poisoning was believed to be caused by a problem in the boiler room, as that was where the alarm originated. He couldn’t say how long the gas was spreading throughout the hotel.

Since 2011, carbon monoxide detectors have been mandatory in all new buildings in Manitoba.

The city said the Super 8 Hotel was last inspected in 2017 and was found to be compliant.

It was scheduled to be inspected again in 2020.