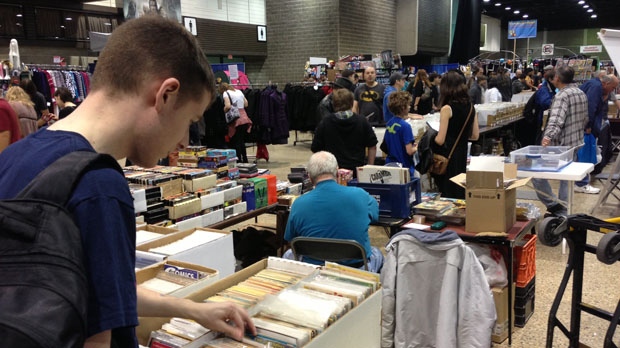 In this file image, a comic book fan flips through some comics at the Central Canada Comic-Con on Nov. 2, 2013.

Central Canada Comic Con will not be taking place in October 2019 in Winnipeg – 24 years after the event’s inception.

“I would like to thank all of the attendees, volunteers, artists, and exhibitors that supported C4 for the past 24 years,” said Central Canada Comic Con’s organizer, founder and CEO Michael Paille in a Facebook post.

“Without you we would never have had such a great convention with so many great celebrities, artists and attractions.”

Paille said over the last few years it’s been hard to put the event together due to the rising costs of rental fees and what he describes as a “lack of local support from businesses and the City of Winnipeg.”

The Facebook post also says the RBC Convention Centre, which hosted the event for the last 12 years, is unavailable on the necessary dates.

“With all of these put together it makes it impossible for us to organize a convention of C4’s size this October,” Paille wrote.

Paille said he and the executive committee looked at other options as well as other cities for the convention, but the search proved to be unsuccessful.