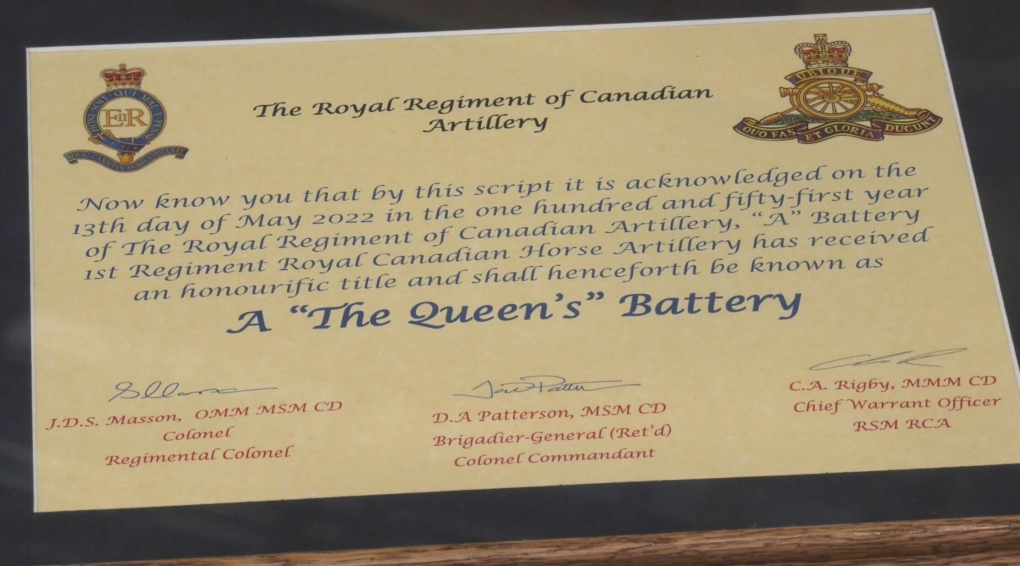 A Battery was granted the title of “The Queen’s Battery”, an honour given by the Queen herself that will carry on throughout history. (CTV News Photo Cody Carter)
CFB SHILO -

Members of Canadian Forces Base Shilo’s 1 Royal Canadian Horse Artillery gathered Friday for a ceremony celebrating the Queen’s Platinum Jubilee with a name change for one of their Batteries.

A Battery was granted the title of “The Queen’s Battery”, an honour given by the Queen herself that will carry on throughout history.

Acting Commanding Officer Major Andrew Curr says the new designation recognizes their history while also looking ahead to the future.

“We have A Battery deploying to the [Enhanced Forward Presence] Battle Group in Latvia within the next month, so as we receive this honour, we continue to go forth on behalf of Canada and Canadian citizens.”

A Battery is the oldest regular force unit of the Royal Regiment of Canadian Artillery, which celebrated its 150th anniversary last year.

Canada's Chief Public Health Officer Dr. Theresa Tam and other federal officials are providing an update on the COVID-19 pandemic in a virtual press conference.

Foreign Minister Melanie Joly is today announcing a fresh wave of sanctions against Vladimir Putin's regime including a ban on importing Russian vodka, caviar and diamonds. The ban on the import of certain luxury goods from Russia covers alcoholic drinks, fish and seafood.

Mercedes just sold the world's most expensive car for $142 million

Mercedes-Benz confirmed on Thursday that it recently sold the world's most expensive car. A very rare 1955 Mercedes-Benz SLR coupe that had been kept in the German automaker's collection was sold to a private owner for €135 million, the equivalent of $142 million.

Blocking inflammation may be why some pain becomes chronic, study finds

A new Canadian study has found that using anti-inflammatory drugs and steroids after injury may actually increase the chances of developing chronic pain.