Church in Shamattawa destroyed by fire, cause not suspicious 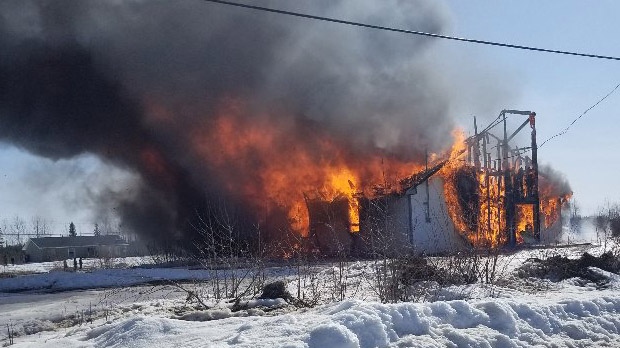 The church was fully engulfed in flames when officers arrived. (Source: Manitoba RCMP)

A fire that devastated an Anglican Church in Shamattawa Wednesday is under investigation, but police do not believe it is suspicious.

The Mounties responded to the fire at St. Johns Anglican Church Wednesday morning, and said no one was hurt.

The church, which was still in use prior to the fire, was fully engulfed in flames when officers arrived.

An RCMP spokesperson said investigators believe the fire originated in a mechanical room where a furnace had recently been acting up.

Shamattawa #rcmpmb responded to a fire at the Anglican Church in the community on the morning of April 18. Officers arrived to find the building engulfed in flames. No injuries were reported & the fire is not believed to be suspicious. Shamattawa RCMP continue to investigate. pic.twitter.com/gCFdzDQ16x

Shamattawa is a fly-in community located about 750 kilometres northeast of Winnipeg.