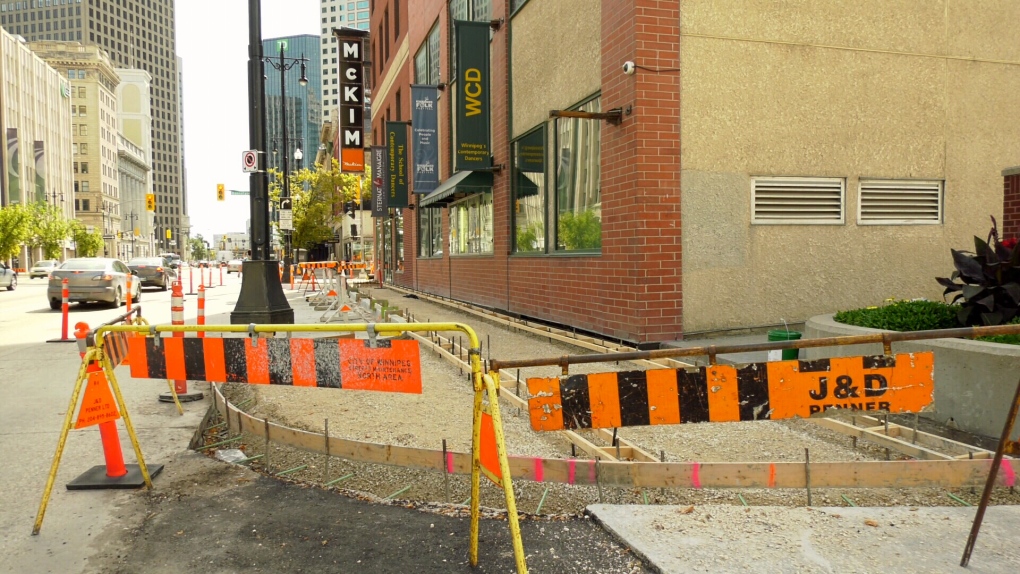 The city councillor for Winnipeg’s Exchange District would like to see a better solution for a Main Street sidewalk being narrowed to make way for a loading zone.

Vivian Santos, who represents the Point Douglas ward, said she learned about the construction on social media this week.

“It didn't come across my desk,” Santos said a phone call with CTV News Sunday.

The sidewalk in question, which appears to be shrinking to about half its size, is located on Main Street near the corner of Bannatyne Avenue.

In an email to CTV News, the city said the new version of the sidewalk is about 2.2 metres wide and within acceptable accessibility standards for a downtown sidewalk.

“The project was undertaken as a result of a unique situation identified through feedback received from 211 Bannatyne and its users to ensure a safe pick-up and drop-off location for families and children using the facility for music and dance lessons,” the city said.

“Transportation planning in the downtown, given the limited space within the existing public right-of-way, is a matter of balancing the needs of all users including pedestrians, cyclists and motorists, and sometimes involves making compromises to achieve an acceptable solution for all users,” the city said.

Located inside 211 Bannantyne Avenue is a dance school, restaurant and offices.

Santos said the issue about a lack of space in the area stems back to 2018 when some on-street parking and loading zones were removed to create bike lanes.

Santos said she is familiar with the area and believes other options could have been explored. She said she would like to meet with the public works department about the project.

The city said the loading zone on Bannatyne was removed in June 2018 when construction started on the bike lane.

It is anticipated the project will be completed by the end of October, the city said.

Winnipeg Trails Association executive director Anders Swanson said the move to narrow the sidewalk is as a result of a ‘backwards priority system’.

“I was really surprised in 2019, Winnipeg is taking away any space for pedestrians at all. We have a massive wide street, very fast moving cars,” said Swanson.

“We’ve created a city where machines are more important than people walking around.”

He said the association plans to raise the issue at the city’s next active transportation advisory committee meeting.

“It means you can’t have bike parking, and it makes it more difficult for people two people to walk side by side,” said Swanson.

“It should be designed for two people in wheelchairs going somewhere,” he said.

‘A practical issue’: The School of Contemporary Dancers

Faye Thomson is the co-director of The School of Contemporary Dancers, which moved into 211 Bannatyne in the early 2000s.

She said until the bike lanes on Bannatyne were installed in 2018, people coming to the school used the loading zone on Bannatyne.

When the drop-off disappeared, she said the school requested a meeting with the city, which was sympathetic to its concerns.

“The solution has nothing to with us. We just have hundreds of kids who need to unload in a safe unloading zone,” said Thomson in a phone call with CTV News Sunday.

She said over 100 students a day come to the school because there are rehearsals up to seven days a week, and some of the students are as young as two-years-old.

CTV News asked Thomson about the city councillor for the area wanting a better solution.

“I think our view is, we need a safe loading zone that’s on the side of the building. How they come to that is for their planning department to come up with.”

Thomson said many of the students are supportive of bike lanes. “This is not a philosophical issue. It’s a practical issue,” Thomson said.