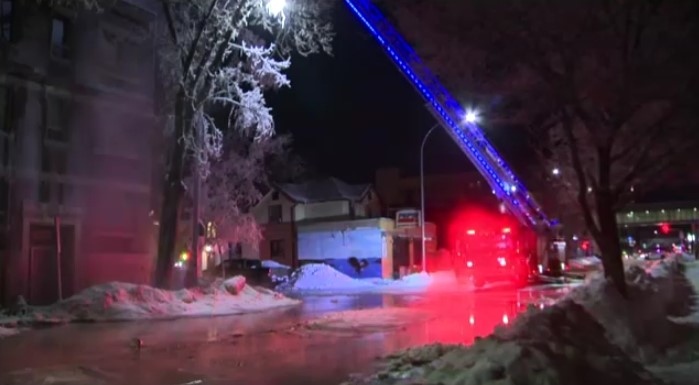 Crews with the Winnipeg Fire Paramedic Service are expected to remain on the scene of an apartment building fire for most of Friday, as the cold weather creates challenging conditions for them.

Firefighters were called to the incident just after 2 a.m. at a vacant apartment building in the 600 block of William Avenue. This same building had been damaged by a previous fire in July 2021.

When crews got to the scene, they found heavy smoke and flames coming from the building, and launched an exterior attack because it was unsafe for them to go inside.

The Winnipeg Police Service’s AIR1 helicopter was used to help out firefighters by monitoring the scene from above and providing updates.

Residents of one neighbouring home evacuated as crews worked to protect the home from the fire. The house sustained water and heat damage.

As of 7:15 a.m. on Friday, crews were using aerial ladders and hose streams to extinguish the fire. They are expected to remain at the scene for most of the day.

According to the City of Winnipeg, the cold weather has created challenges for firefighters. The city noted the area surrounding the scene is slippery and covered in ice.

Extra units are on the scene as crews need to be frequently rotated to protect them from the cold.

No one has been hurt in the fire.

William Avenue is closed between Sherbook Street and Isabel Street. People are asked to avoid the area.

The cause of the fire is being investigated. There are no damage estimates at this time, but the building is likely a total loss.

Plane with 22 people on board missing in Nepal's mountains

A small airplane with 22 people on board flying on a popular tourist route was missing in Nepal's mountains on Sunday, an official said.