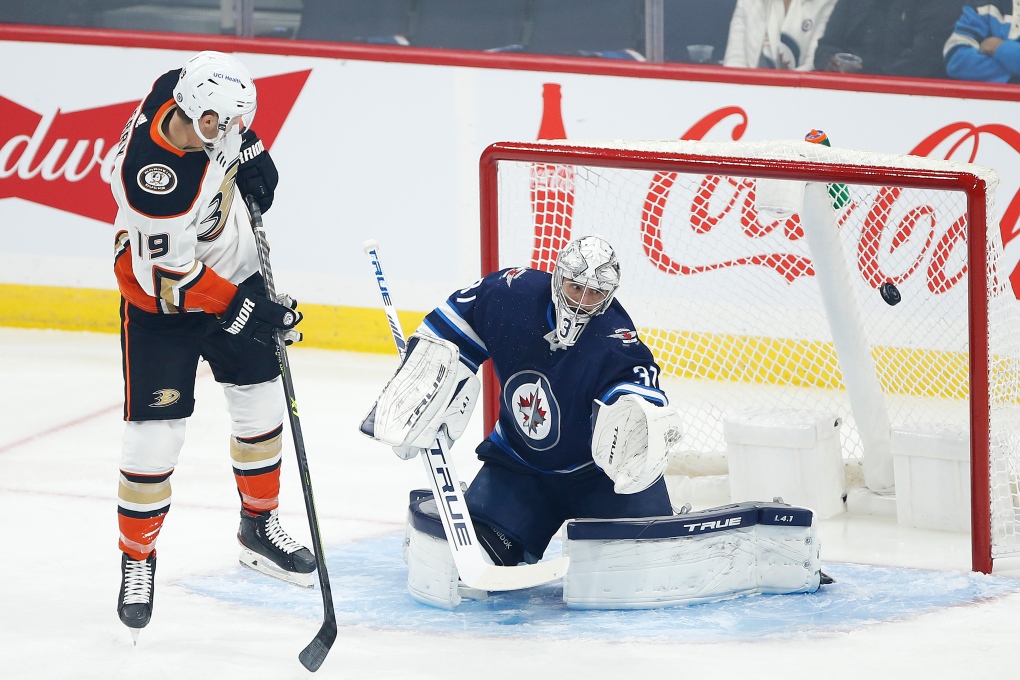 WINNIPEG -- Kyle Connor scored twice and added an assist Thursday as the Jets defeated the Anaheim Ducks 5-1 despite having two of their top-line players in COVID-19 protocol.
WINNIPEG -

Kyle Connor scored twice and added an assist Thursday as the Jets defeated the Anaheim Ducks 5-1 despite having two of their top-line players in COVID-19 protocol.

Wheeler was symptomatic, tested positive and began the NHL's minimum 10-day quarantine on Monday. Scheifele tested positive Tuesday but is asymptomatic. He needs to stay that way and produce two straight negative tests before returning to the team.

Pierre-Luc Dubois had a goal and assist Thursday, while Andrew Copp and Josh Morrissey also scored for Winnipeg. Nate Schmidt collected a pair of assists.

Connor Hellebuyck made 38 saves for the Jets and Ducks goalie John Gibson stopped 22 of the 26 shots he faced.

Troy Terry scored for Anaheim (2-3-0), which was playing the third game of a four-game road trip.

Terry opened the scoring with a power-play goal at 2:46 of the first period, tipping in a Cam Fowler shot.

The Jets have now given up eight power-play goals on 16 penalties this season.

Winnipeg's transformed top line of Connor, centre Dubois and Evgeny Svechnikov tied it up at 4:10, with Dubois deflecting in a Connor shot.

The Ducks outshot the Jets 10-4 in the first period.

Copp gave Winnipeg a 2-1 lead 61 seconds into the second. The Jets went on the power play less than a minute later, but couldn't widen the gap.

Anaheim had a pair of power plays, but this time Hellebuyck and the Jets' penalty killers held tight.

The Ducks had a 27-19 lead in shots on goal after the second, but the Jets carried over a man advantage into the third and made good on it 1:30 into the final frame.

Morrissey's shot from the point went past Gibson on the stick side with 14 seconds remaining on the power play.

Anaheim pulled Gibson with more than four minutes remaining in the third and Connor scored on the empty net with his second attempt.

His first shot slid and hit the post, but his second try from the other end of the ice went into the empty cage at 17:11.

With Gibson back in net, Connor added his fifth goal of the season when he beat the netminder with a low shot with 1:14 left in the period.

Winnipeg hosts the Nashville Predators on Saturday, while Anaheim visits the Minnesota Wild the same night.

This report by The Canadian Press was first published Oct. 21, 2021.