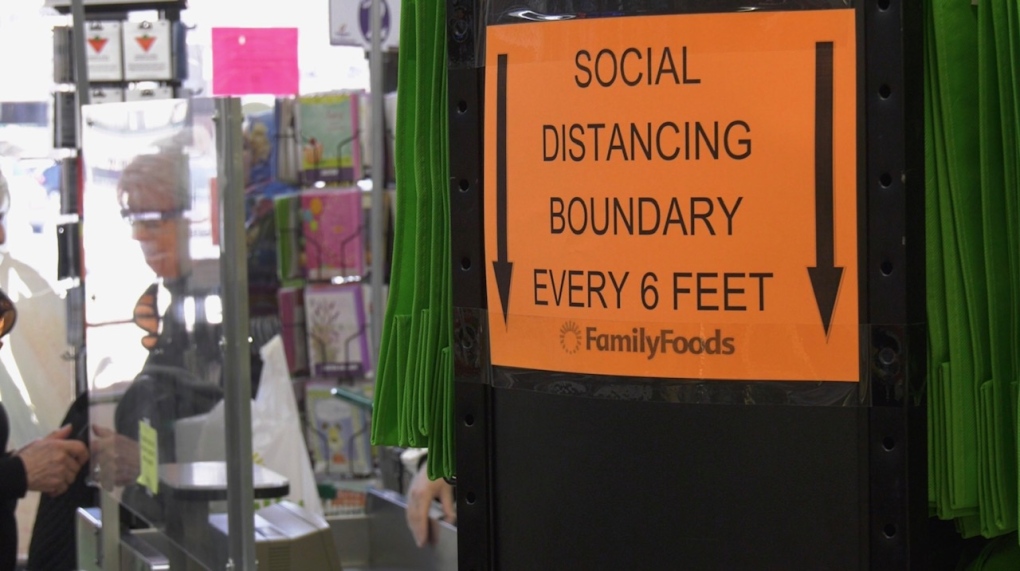 WINNIPEG -- Manitobans are continuing to adjust to new measures put in place at grocery stores to protect staff and customers from COVID-19.

Health officials in Saskatchewan said Monday some infections in that province can be traced back to grocery shopping.

While there’s no evidence so far of that happening in Manitoba, the province’s chief provincial public health officer said Tuesday it’s the reason stores have been ordered to help keep you safe by implementing physical distancing measures.

“We are working on a rather detailed analysis of our first cohort of patients where we might be able to pull out some more of that information,” said Dr. Brent Roussin, when asked about the issue. “We just know that this is the reason behind social distancing – it’s really to stay home.”

“When you’re out, then that’s when there’s a risk of being exposed or exposing someone else. So stay home, when you are out, practice that social distancing. Wash your hands frequently.”

COVID-19 can be spread through respiratory droplets during close contact with an infected person who coughs or sneezes. It can also be contracted if you touch your mouth, eyes or nose after touching an object contaminated with COVID-19, however, it is not certain how long the virus can live on a surface, according to the Public Health Agency of Canada (PHAC). The PHAC says there’s no evidence the disease has been transmitted through food.

Officials said the bigger risk is coming in to contact with someone who has the virus or exposing others to it when you’re not at home.

“We’ve seen in some of our recent cases that many of them are actually individuals in the household who went shopping,” Dr. Shahab said during a media briefing Monday in Regina, Sask. “So it’s really important that we are very thoughtful about who goes shopping and how frequently.”

Grocery stores have been beefing up strategies to allow for physical distancing for weeks.

“If you follow the rules and the regulations, I think you’re going to be safe,” said grocery shopper Chuck Black after picking up a few things at the Food Fare in Silver Heights.

A lineup formed outside Safeway in Osborne Village Sunday morning as shoppers entered the store one-by-one. Once inside, they were ordered to take a cart and follow arrows on the floor guiding people through the aisles to keep traffic moving one way and allow for physical distancing. Similar measures have been implemented in stores across the city.

Last Friday, Costco implemented a new policy only allowing two people per membership card in its stores. A measure the president of a union representing 7,500 Manitoba grocery store workers would like to see taken even further and implemented by other retailers.

“People could do the one customer, one cart rule which is if you’ve got a big family don’t bring them to the grocery store,” said Jeff Traeger, head of the United Food and Commercial Workers Local 832. “Bring one person with one cart to do the shopping.”

Public health officials aren’t providing a specific number on how many people are allowed inside grocery store at one time — that would be quite difficult and could vary greatly depending on the size and design of each store – but in order to make sure customers can practice physical distancing, some stores are setting their own limits.

“We went down to 40, now we’re looking at going down a little bit lower to about 30, 35 at a time,” said Food Fare owner Munther Zeid, referring to the Silver Heights location.

“We’ve tried it but a lot of customers were against it because it was sort of keeping customers in the store longer,” he said.

Black said it’s ultimately up to customers to buy in and respect store policies to help keep everyone safe, something he said most people are doing.

“Everyone kept their distance on their own,” he said. “They didn’t need to be told. If somebody stopped and there wasn’t room, everybody stopped. When they proceeded, we proceeded with them.”

CTV News asked some of the larger retailers for specific numbers on how many people they’re allowing in their stores at one time. While no exact numbers were provided some of the major retailers have indicated they are limiting numbers based on the size of their stores.

Most retailers said if there are issues, staff will give shoppers a kind reminder.